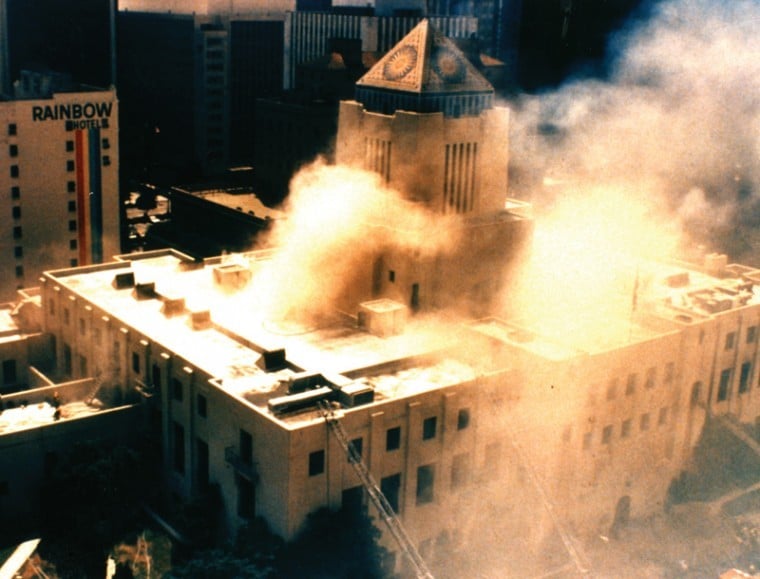 On April 29, 1986, an arsonist set fire to the Central Library. The building remained closed until 1993. 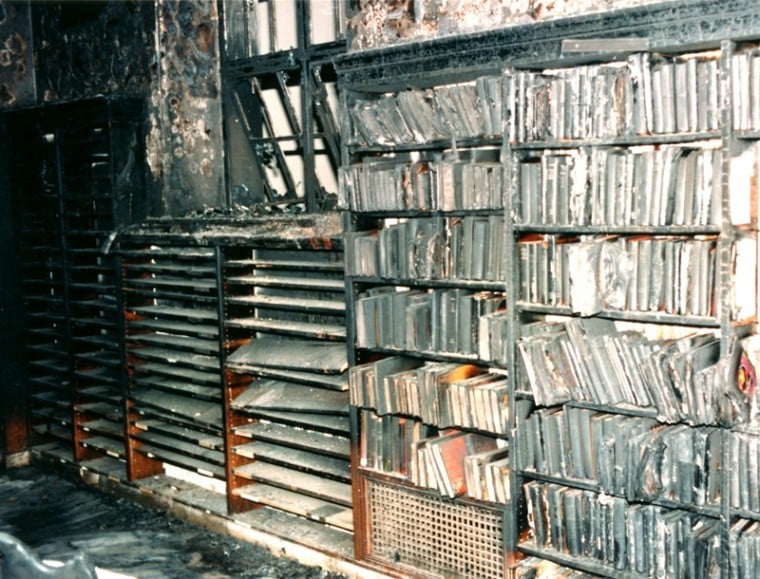 This week marks the 26th anniversary of the fire that roared through the Central Library on April 29, 1986. Some of the charred remains. 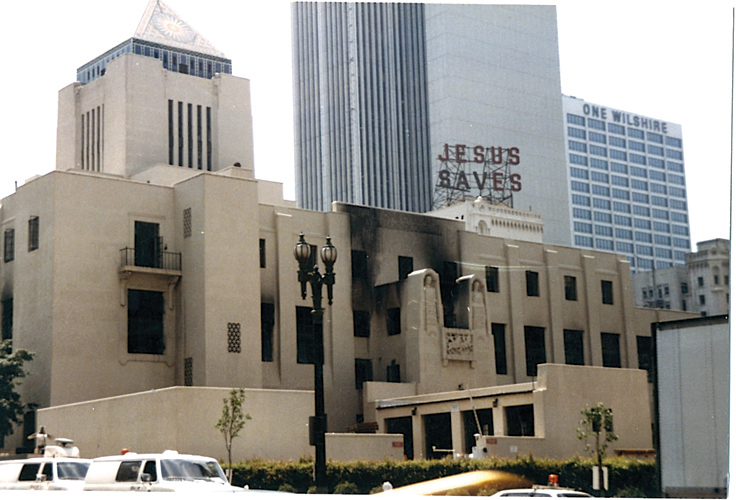 This week marks the 26th anniversary of the fire that roared through the Central Library on April 29, 1986. The building with burn marks. 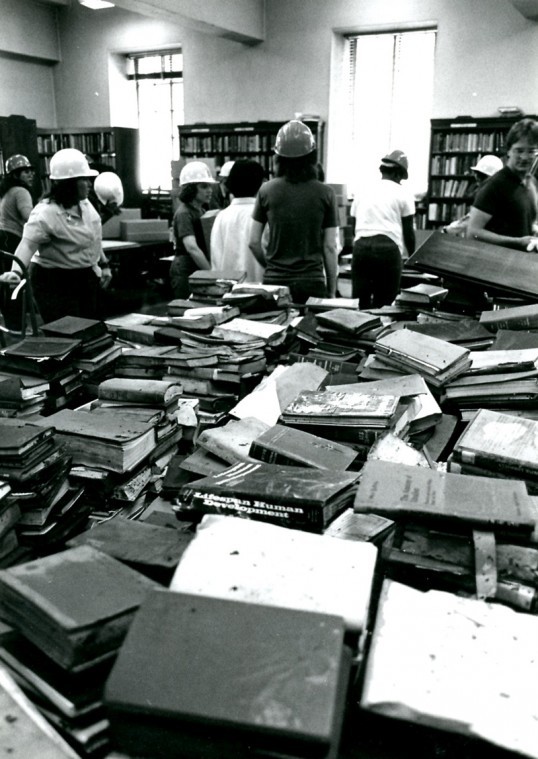 This week marks the 26th anniversary of the fire that roared through the Central Library on April 29, 1986. Librarians cleaning up and salvaging books.

On April 29, 1986, an arsonist set fire to the Central Library. The building remained closed until 1993.

This week marks the 26th anniversary of the fire that roared through the Central Library on April 29, 1986. Some of the charred remains.

This week marks the 26th anniversary of the fire that roared through the Central Library on April 29, 1986. The building with burn marks.

This week marks the 26th anniversary of the fire that roared through the Central Library on April 29, 1986. Librarians cleaning up and salvaging books.

April 29, 1986, was a day when most of the world fretted about a horrific disaster known as Chernobyl. In Los Angeles, it was the day our library burned and our earth stood still.

Sometime after the library opened at 10 a.m. on that sunny day, a fire was set somewhere between novels by Robert Coover and John Fowles. It quickly got out of control and began a terrible trip west, through the magazine pool, the map room, the Social Science stacks, the Science stacks and into the Patents Room. It finally belched obscenely out of the windows looking over the library parking lot where Maguire Gardens now sits.

Theories pointed toward a would-be hero/arsonist who set the fire and then hoped to put it out to impress people. Instead, the tinderbox qualities of the overburdened 60-year-old structure acted very much like the charcoal chimney starter you use to get coals ready for your barbecue. In a few heartbeats the ignited pages from a novel or two became a moving wall of flame eating up centuries-old books, magazines and newspapers. The fire was so hot that by the time it reached an area above the old History department, the steel ladders connecting the eight layers of stacks glowed cherry red. Water from fire hoses created steam that made visibility zero.

The first fire units arrived within five minutes of the requests for help that came in around 10:50. Firemen punched holes in the walls to let out heat, but the fire grew. Ultimately, 60 fire companies joined in the fight, with a total of 350 firefighters battling the blaze.

I was a reference librarian, and I reluctantly remember trudging through the hell-black magazine “pool” that night when they let us into the burned shell to assess the damage. At first it didn’t look so bad, since the walls were all where they were when we had left in a hurry that morning. Then, despite orders to the contrary, we climbed the twisted stairs in the Fiction stacks to see devastation that turned out to be the beginning of a very long journey of misery and despair as dark as the incinerated books.

Volunteers came by the thousands in the two weeks after the tragedy, hustling to get soggy books into boxes headed for freeze drying in Texas. It would be almost three years before we were to see the books again.

Even after total resurrection in 1993, when those who stuck it out returned to dear old Central, it seemed like a terribly unreal nightmare. Just to ponder 200,000 books destroyed by the act of a madman is bad enough, but to have worked with and touched these objects created by deep thought and intellectual struggle makes the sadness all the more haunting.

Irreplaceable numbers of hard copy periodicals, drawings from patents, historic maps, fine art prints, photography negatives and newspaper archives were turned into ash or mush by the water that inexorably seeped down the stacks and into the basement. The bottom floor of the venerable landmark became a waterlogged graveyard of collections.

Today, it seems like just a few people remember the gravity of loss. However, the hundreds of library staffers grieved during three years of working in a dank warehouse in East L.A. and at branches all over the city. There were reverberations like a stone thrown into water as people took the losses personally and did what people do to stop feeling the pain. Even the respite in the temporary but grossly inadequate Title Insurance Building in Downtown could not make the library whole again, despite the joyful return of thousands of freeze-dried books.

The city finally took to the task of remaking the building and did this spectacularly. The old idea of Central as a research library like the great New York Public Library sort of crumbled away. The new building had dazzling places and “the grand canyon of books,” but the paltry book budgets and constant cutting of library funds, along with clueless local politicians, caused changes that created a long, slow conversion to a place that is more of an architectural landmark and Internet cafe than a research center. It is still very much a great library, just not as great as it could have been.

Today’s Central Library is comfortable compared to the torturous, institutional feel of the old structure. There are young, terrifically accomplished librarians who keep the flames flickering, but they cannot remember what it was like when we had a hold of the past and the future all at one instant.

There was a pace we can hardly recall nowadays. A “ticking of amino acids” slow, thoughtful pace while we made meticulous study of the collected learning of mankind from the words beneath the bust of Homer to the muttering of Peterson, the crazy-fool who did calculations every day from opening to closing. It was a place where there were telephone switchboard operators sending in reference questions that Google could not touch today. The staff was undeniably odd and intellectual, but full of piss and vinegar along with moxie gained the hard way, from the people who depended on Central.

On most days I am grateful I had the privilege of immersing myself in the magic of the Central Library for these three decades, even if I do roll my eyes internally when someone describes my time on a reference desk in some cockeyed amalgamation of “Jeopardy” mixed with relaxing with the great books while resting my green felt slippers on silk pillows. There are quite literally a thousand anecdotes that, put together, make the place seem like a Robert Altman movie, one of the good Robert Altman movies.

As Shakespeare said, there are 20 shadows of grief, and each April 29 I am reminded of another one. We were given the opportunity to pass the torch, the light of learning atop the pyramid. Instead, this little arsonist son of a bitch diminished that flame. It took seven years out of our lives and the lifetimes of our predecessors. It was all taken by a twisted man who hated the goodness he could not seem to approach, except with a match.

Glen Creason is a Map Librarian at the Central Library and the author of Los Angeles in Maps.