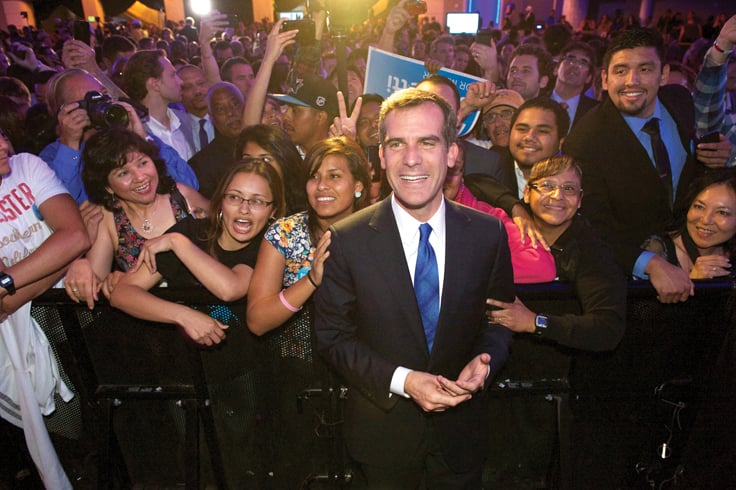 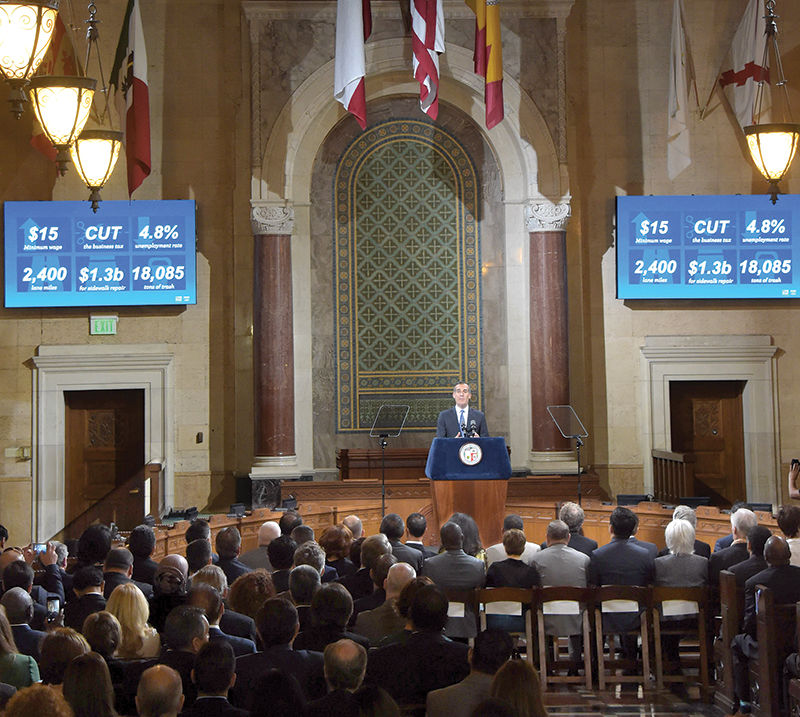 Mayor Eric Garcetti delivering the State of the City speech in 2017 in City Hall. 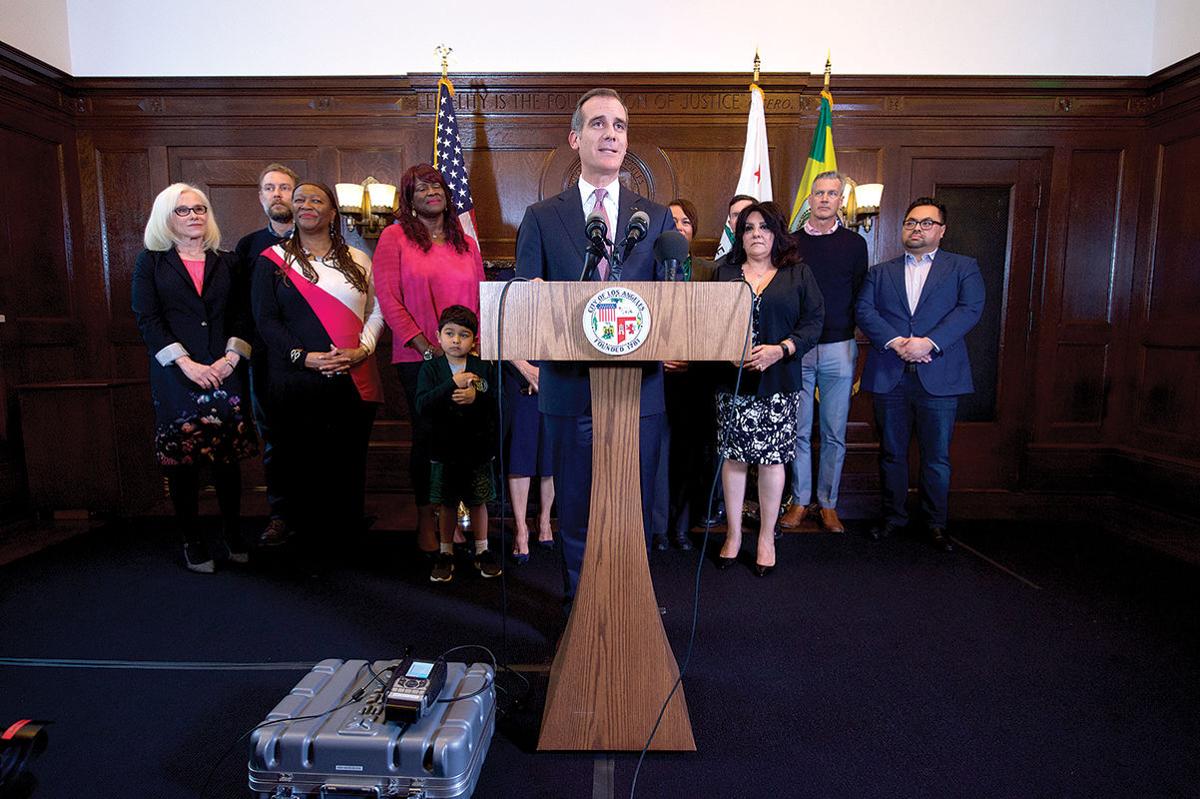 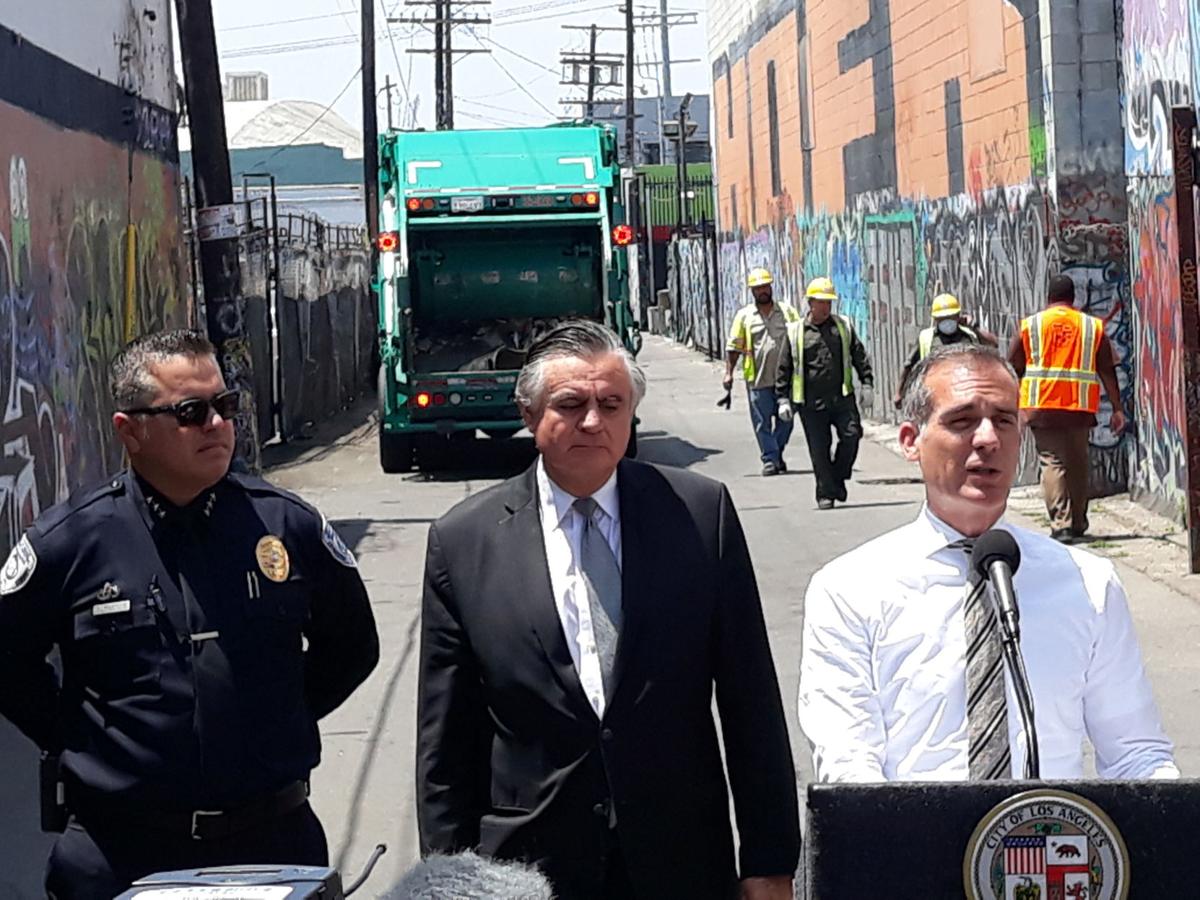 Mayor Eric Garcetti last month detailed plans for how the city will respond to a scourge of illegal trash dumping.

DTLA—In the story of Icarus, the son of a prominent leader is given a pair of wings fashioned from wax and feathers. He straps them on and, thrilled by the experience, soars higher and higher into the sky. Ultimately the dude, oblivious to warnings about the dangers of his path, flies too close to the sun. The wings melt, and Icarus plunges into the sea.

If you like that story, then you’ll love the one about Mayor Eric Garcetti. It’s almost too easy, but call him Ericarus.

Monday, July 1, marks the sixth anniversary of Garcetti’s first full day as the 42nd mayor of Los Angeles. Now, one can step back and fully assess Garcetti as a leader. By looking at his successes — there have been many — and failures — there have been fewer, but some are utterly devastating — there is a clear story arc.

In fact, “arc” is the perfect word, as Garcetti’s mayoral tenure — starting with a victory in a tough contest over Wendy Greuel in 2013, and a resounding re-election four years later — can be broken down into four rolling chapters. In the first three, he strapped on the mayoral wings and soared high, emerging from the local scene to claim a spot on the national stage. But in the latest chapter, he plummeted to Earth.

The big questions now are, can Garcetti reverse trends that have stunned and angered Angelenos? In the effort to turn things around, is he willing to alter his leadership style and adopt a tough stance that seems counter to his nature? Or will he be forever remembered as the mayor under whom Los Angeles became the homelessness capital of the nation and devolved into Trash City?

Hence, the mayoralty in four chapters.

Chapter 1: Back to Basics: “Back to Basics” was the slogan of Garcetti’s first mayoral run and his early guiding mantra, and it was perfect for the moment. After three terms on the City Council, including six years as its president, he grasped that Angelenos had grown weary of the flash and unbridled personal ambition of Mayor Antonio Villaraigosa. Garcetti watched AnVil squander his potential and lose touch with average Angelenos. The new mayor wasn’t about to repeat the mistake.

That outlook, combined with the economic fallout of the Great Recession, prompted Garcetti to proclaim that he’d be all about fixing potholes, creating jobs and bolstering the city’s shaky economy. The latter was a page from former Mayor Richard Riordan’s book, and it resonated.

Garcetti didn’t reach too far too fast, and instead methodically built on the sentiment that propelled him into office. He had the public behind him as he played hardball when negotiating a new contract with the union that represents most DWP workers (the union had backed Greuel). He exhibited a deft ability to connect with Angelenos on social media, and became known as the “Mayor of Instagram.”

The Mayor After 54 Weeks

He touted transparency, and on his 100th day in office he debuted a website to gauge the city’s performance in myriad sectors. Two days later, he announced that he’d replace then-Fire Chief Brian Cummings in the wake of slow department response times. He also halted the Fire Department’s questionable hiring process. Both moves were applauded.

Garcetti frequently sought to ready L.A. for the future — he advocated for earthquake preparedness, and hired a city Chief Sustainability Officer and an innovation boss. He pushed a proposal to get the federal government to back an ambitious $1 billion overhaul of the Los Angeles River (the plan went comatose after Donald Trump was elected president).

Moves in the Back to Basics era, which lasted about a year to 18 months, were rarely sexy, which was entirely the point. If there was an overarching view of Garcetti as mayor, it was that people didn’t know quite what to think. Everybody liked him, everyone agreed that he was intelligent and forward-thinking, but the city was waiting for him to do something big.

Chapter 2: Winning Time: On June 11, 2014, Garcetti sent a mass email asking Angelenos to lobby George Lucas and his wife Mellody Hobson to build their art museum in Los Angeles. It was a cute move, complete with a hashtag, #WhyLucasinLA. It was also a long-shot, as the facility seemed destined for the Bay Area.

Two-and-a-half-years later, in January 2017, the work paid off, as after consistent wooing — with Garcetti as the public face of the effort — Lucas and Hobson announced that the $1 billion, spaceship-like Lucas Museum of Narrative Art would rise in Exposition Park. It was a huge victory for Garcetti, and proved that he could play the long game.

Garcetti has demonstrated an ability to turn other cities’ stumbles into jewels for L.A. The path to the Lucas Museum, which began after Chicago won, then rejected the facility, would be replicated in August 2015, when Garcetti called for Los Angeles to be the U.S. representative to host the Summer Olympics after Boston earned the designation, then choked on its bid. In September 2017, following copious meetings, tours and negotiations, the International Olympic Committee awarded the 2024 Summer Games to Paris, and the 2028 Games to Los Angeles. The third L.A. Olympics will be the defining city event of the 2020s, and Garcetti was the unquestioned driver.

Garcetti’s Winning Time, spread over a couple years, was multi-faceted. In June 2015, the City Council approved boosting the minimum wage to $15 an hour by 2020, super-sizing an effort that Garcetti had initiated (the mayor had begun by asking for $13.25 an hour). In November 2016, county voters approved both Measure M, a half-cent sales tax that would skyrocket Metro’s rail building regimen, and Proposition HHH, a $1.2 billion property tax bond to build permanent supportive housing for homeless individuals. Garcetti championed both.

The victory streak continued in March 2017. In addition to Garcetti’s steamroll of a re-election — he got an astounding 81% of the vote — Angelenos went his way on two other endeavors: They approved Measure H, a county effort to generate more than $350 million a year for services for homeless individuals, and they rejected Measure S, a slow-growth initiative that Garcetti and others charged would have hampered development in Los Angeles.

Put it all together, and Garcetti enjoyed one of the greatest runs ever for a Los Angeles mayor.

Chapter 3: Presidential Dreams: The idea of Garcetti running for president of the United States seemed laughable when it first came up, but over time the concept entered the realm of the plausible — unlikely, but plausible. The Trump era proved that all the old rules of who could win were out. A mayor becoming president was crazy, but we had just seen crazier.

Although Garcetti never entered the race, the 22 months after his re-election constituted the third chapter of his mayoralty. In this period, he made himself a national figure.

Some of this spun from the wins of the Lucas Museum and the Olympics. But most of it was carefully stoked by Garcetti and his team. The guy has some serious myth-making magic.

In the middle of 2017, Garcetti started crisscrossing the country, touching down in early-voting states such as Iowa, New Hampshire and South Carolina. In 2018 alone he visited 17 states. He pushed an agenda of progressive Democratic party chestnuts such as immigration, housing and hiking the minimum wage. He’d sometimes drop the word “patriot” in remarks, as if testing how it played.

The Garcetti media machine hummed. There were cushy profiles in Vogue and GQ and he appeared on the mega-popular sports-oriented “The Bill Simmons Podcast.” Garcetti made a Washington Post list of the top 20 contenders for the Democratic party nomination.

He found a sweet spot — he could get by on charisma but evade the really hard questions because he never formally entered the race. When broadcasters such as Chris Matthews of “Hardball” asked if he was running, he skillfully delivered non-answer answers that left the door open.

Right until the moment on Jan. 29, 2019, that he said he was not running, it all seemed possible.

Yet even if we didn’t realize it then, all the time the mayor spent on the national stage may have been to the detriment of the city.

Chapter 4: The Great Fall: In recent weeks Garcetti has suffered his worst period as mayor, but trouble had long been brewing.

On May 14, Heather Repenning, a former Garcetti aide and his appointee to the Public Works Commission, got clobbered in a race for a seat on the board of the Los Angeles Unified School District. It was a smackdown for the mayoral star-making machine.

Then came Measure EE, a parcel tax that sought to raise $500 million a year for local schools. After helping broker a deal to end the January teachers’ strike, Garcetti had aggressively pushed the June 4 ballot box item as a way to allow the district to afford raises and new hiring.

The effort blew up in Garcetti’s face in the way that dynamite explodes in the mug of Wile E. Coyote. Measure EE needed two-thirds approval to pass. It finished with only about 45%.

Somehow, that wasn’t the day’s worst news. Also on June 4, the annual homeless count was released, and revealed that homelessness had spiked 16% in the city and 12% in the county over the course of a year. The numbers only affirmed what everyone had already noticed and lamented. Sure, Garcetti had dedicated significant time and resources to addressing homelessness, but the scene on the streets is what grabs attention.

Things got worse from there, as Los Angeles Downtown News and other media outlets reported on disgusting illegal trash dumping problems in Downtown. The community has faced a typhus outbreak and rat sightings in City Hall.

Garcetti has struggled to respond. In a June 11 mass email slugged “Rising to the Challenge” he stated, in regards to homelessness, “I take full responsibility for our response to this crisis.”

Yet no one is assuaged, and city government in particular looks woeful. Suddenly, some are wondering if Garcetti, who built his mayoralty on not pulling a Villaraigosa, in fact pulled the ultimate Villaraigosa, touring the country and building his personal brand while Los Angeles fell apart at the seams.

Epilogue: The Age of Uncertainty: Where does Garcetti go from here? I wish I knew the answer.

The mayor has never fully utilized the bully pulpit his office affords, and if he really hopes to turn not just the city, but also the perception of the city, around, he may need to ratchet up his toughness. He’s gotta kick butt.

The situation demands that the Back-to-Basics Garcetti accept that Los Angeles has squandered perhaps its most basic task — keeping the streets clean and people healthy. He can’t pretend this is anything other than a colossal failure.

There are still more than three years until Garcetti’s term ends, which provides time to pull himself out of freefall. Reversing course won’t be easy, and won’t be the stuff of a presidential campaign, but it is possible.

The good news for Garcetti is that he has an opportunity to revise the next chapter of his mayoralty. It’s time to put down the wings and, more than ever before, focus on the city he was twice elected to lead.