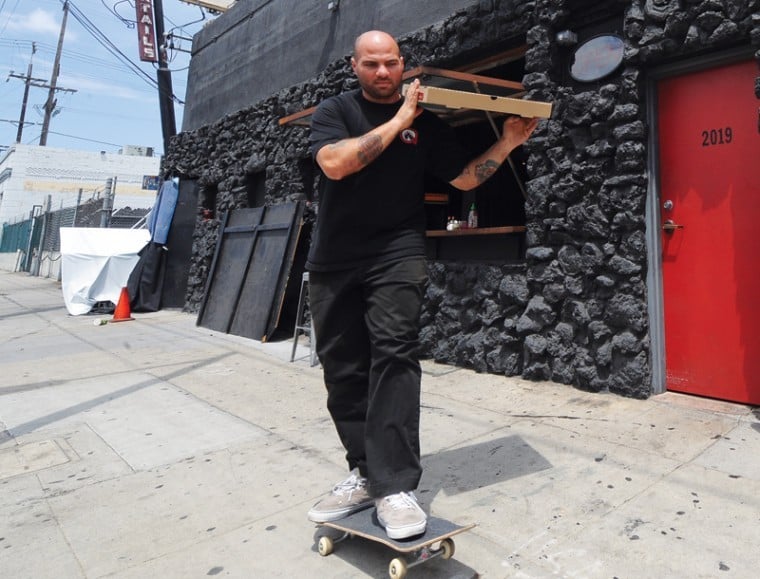 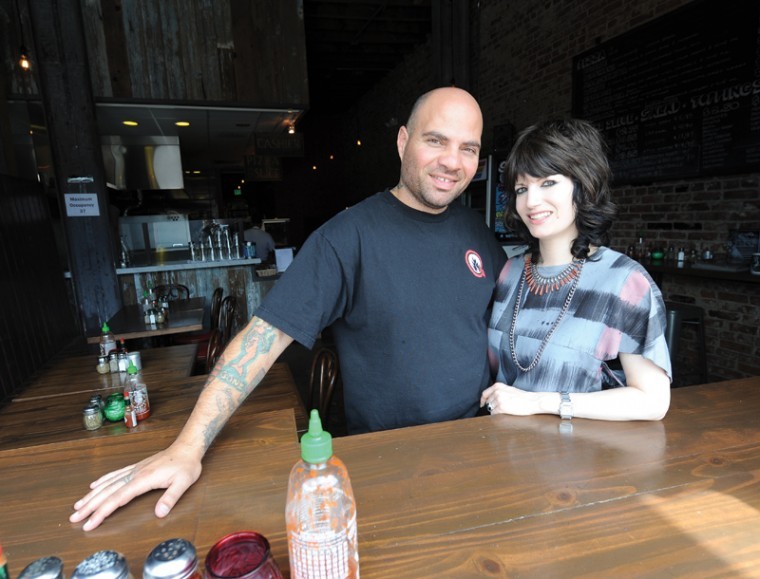 DOWNTOWN LOS ANGELES - It's safe to say that Salman Agah has an approach unlike that of most bosses. Rather than rely on intense research or market analysis, his decisions are informed by grinds, ollies and other skateboarding moves.

"All the things I've learned in skating I've applied to this business," said Agah, a former professional skateboarder who, with his wife and brother-in-law, owns Seventh Street's Pizzanista. "I kind of look at everything as a skateboarding trick, so opening a restaurant is like a new trick.... It's similar in that you've got to be able to take a risk, be able to deal with falling down and getting back up."

As evidence of his decision-making process, consider the name of the restaurant. Although it originally launched as Toddy G's, an ownership division prompted the search for a new moniker. Agah found inspiration not in a reference to cheese or cooking methods, but rather in fiery British punk pioneers The Clash.

"They have an album called Sandinista," he said. "We also liked that ‘nista' means to be a connoisseur of something. We thought it had a really good ring to it."

Agah, who sports a shaved head and thick, tattooed arms, and favors a casual jeans and T-shirt attire, is one of two children of Iranian and Azerbaijani parents. Born in 1972, he began skating at the age of 5 after his father bought him a skateboard. By the time he graduated from high school he had turned pro and was skating all over the world in competitions and demonstrations. In 1993 he was named Thrasher Magazine Skater of the Year.

He is known as a pioneer in the sport for the switch stance, a move in which a skater rides opposite to his or her natural side. It's akin to learning how to be ambidextrous.

Still, nothing he's done has been quite like making Downtown pizza.

Agah and his affable art dealer wife, Price Latimer Agah, have lived in the Arts District for about seven years. Last October they partnered with Toddy Giordanella to open the 1,200-square-foot pizzeria Toddy G's at 2019 E. Seventh St.

The relationship dissolved and Giordanella left in June. Agah would not discuss the reasons except to say that Giordanella wanted to return to his roots in New Jersey. Giordanella could not be reached for comment.

The Agahs initially thought of doing a bar in the area. Then, one day about two years ago, Agah was walking his dogs and ran into Skyler Reeves, head of operations for 213 Inc. and the former general manager of the company's latest nightlife endeavor, Tony's Saloon.

Agah inquired about opening a restaurant in the adjacent Seventh Street space. He thought it seemed natural for a desolate portion of Downtown.

"Everybody loves pizza and we're next door to Tony's bar, so obviously what goes better with beer than pizza?" Latimer Agah reasoned.

The 213 Inc. crowd agreed, and both businesses saw a benefit. Tony's happy hour clientele has increased since the opening of the pizza spot, said Reeves. That's partly attributable to the fact that customers can order a slice from the bartender and have it delivered to the bar.

While the bar crowd is a nice base, the Agahs know they need to expand their business. Hence, the focus on the concept: New York style pizza with a traditional thin crust but an open mind toward toppings.

Before the restaurant originally opened, the partners consulted with Steve Samson (chef and owner of the oft-praised Pico Boulevard pizza joint Sotto LA) to develop their dough, sauce and menu. The recipes have remained the same since the split.

"Everything is handmade every day," Latimer Agah said. "It's New York pizza with California fresh ingredients. We use organic ingredients as much as possible."

Popular menu items include, well, the Meat Jesus, a hearty concoction of bacon, sausage, pepperoni, spicy soppressata and mushrooms. There's also the macaroni and cheese, a multi-cheese macaroni and cheese meal on a crispy slice. It's the Sunday special and usually sells out, Agah said.

While Tony's provides a swath of regulars who pair their beers with a slice, they also pull customers from the skateboarding circuit. That is evident on review sites like Yelp, where praise for the slices is augmented by mentions of Agah's other career.

"The owner is the type to check on you and even sit down and chat with you when you admit you are totally a big fan of his legendary skateboarding!" one Yelp reviewer wrote.

Pizzanista also has fans at the Downtown location of "Rob Dyrdek's Fantasy Factory," an MTV show that focuses on skateboarding. Other customers come from The Berrics, an indoor skate park just across the L.A. River in Boyle Heights.

For the skating community, Pizzanista is an oasis in a relative food desert.

"This neighborhood needed a cool pizza spot," said Brian Atlas, general manager of Street League Skateboarding, a skate league founded by Dyrdek. "I think that street in particular has a lot of potential."

With the combination of bar patrons, skaters and Agah fans, the restaurant is serving about 250 people per day, Latimer Agah said. They have a 10-year lease on the place, and although they are only open for dinner, she said they will soon add lunch service.

Meanwhile, skate fans who call for delivery may get an extra treat. If the call is close enough, Agah is known to hop on his board, prop a pie up on his arm and deliver the pizza himself. No other tricks are promised.