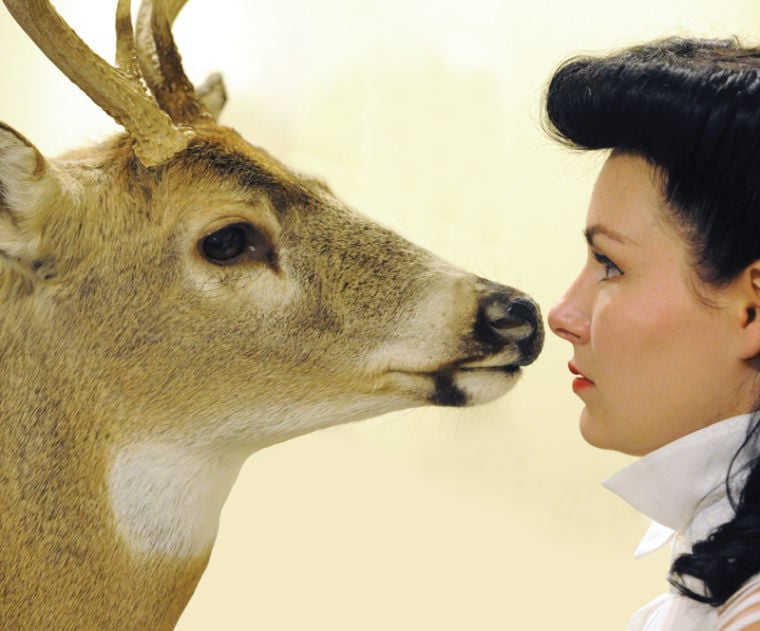 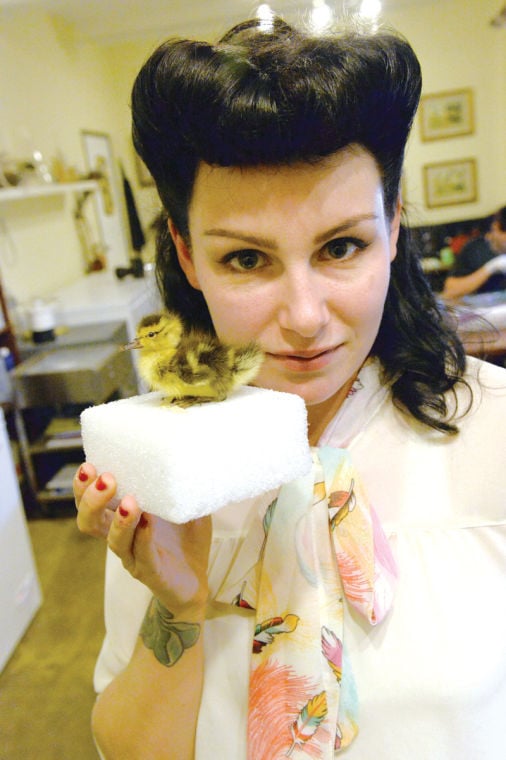 Allis Markham began teaching classes at her Prey Taxidermy in the Spring Arts Tower in March. Sessions include “Birds 201-Ducklings!” 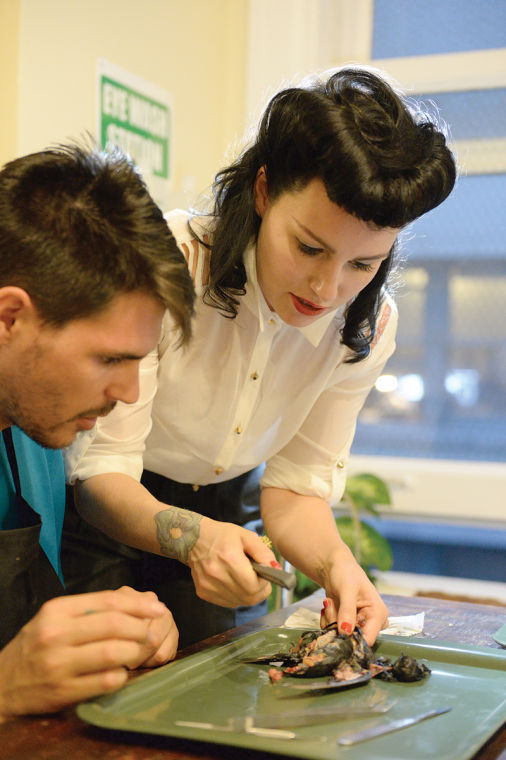 Markham holds classes for about seven students at a time in the Historic Core. Classes are on the weekends and evenings.

Allis Markham began teaching classes at her Prey Taxidermy in the Spring Arts Tower in March. Sessions include “Birds 201-Ducklings!”

Markham holds classes for about seven students at a time in the Historic Core. Classes are on the weekends and evenings.

DOWNTOWN LOS ANGELES - Allis Markham, with her painted lips, porcelain skin and polished red fingernails, is standing in her 530-square-foot studio in the Spring Arts Tower. Suddenly the door flings open and an excited Muriel Leventis bursts in.

Markham’s eyes widen with fascination and she asks, “Is there? What kind of condition is it in?”

Markham looks at her assistant, Madison Rubin, and asks if she wants to check it out. Rubin nods and she and Leventis hurry down the hall.

This is not an uncommon experience for Markham, a 31-year-old taxidermist for the Natural History Museum who recently began holding classes on the trade in the Historic Core. With her 1940s Victory Curl and tattoos peeking out of sheer sleeves, she hosts sessions such as Birds 101, where students like Leventis learn how to skin, flesh (remove the fat), wire, mount and groom their own feathered creatures, all in a weekend or a few nights.

Markham, who grew up in Indiana watching her Native American grandfather taxidermy animals — there were always animal parts around, she said — earned a game heads certificate from the Advanced Taxidermy Training Center in Montana. While working in social media at Disney, she began volunteering in the taxidermy department at the Natural History Museum in Exposition Park. Markham said she basically bugged department head Tim Bovard until he hired her.

That was three years ago. She still works there 30 hours a week, while also hosting sessions at her Prey Taxidermy in Downtown. She has two different “Birds 101” classes this week. Coming at the end of the month is “Birds 201-Ducklings!”

“L.A. is hardly a hotbed of taxidermy,” Bovard said with a laugh. “But she’s now exposing people to this lost art.”

Markham’s studio is a mash-up of past and present, the decor a mix of game heads and mounts, including a whitetail buck, her first-ever taxidermy, and 1960s furniture. There’s a 1910 wood Zenith radio, Bluetooth-enabled, purchased from Etsy. During a recent class she lit three scented candles, just in case the freezers filled with future specimens got a little “skunky.”

Markham sees a parallel between the revival of taxidermy and the renaissance underway in Downtown Los Angeles, which is why she opted to teach her classes in the Central City. Plus, the Spring Arts Tower is 100 years old, and the Natural History Museum turned 100 last year.

“What I do is old-fashioned and raw, and so is Downtown,” she said.

Her world is one of precision, nature and tools, all of which come into play as she prepares specimens and conducts research into an animal: What is a characteristic pose? Are their eyes almond or round? Do they have low eyelids, and is that an aggressive characteristic?

Speaking of eyes, the Prey studio is stocked with them. Walking past the surgical steel autopsy tables, on which the students work, one finds a bin with drawers marked “medium eyes,” “xsmall eyes,” “small eyes” and “weird eyes.” There’s a wooden box of antlers, and another bin with “various feet” and feathers.

Markham started teaching classes in March. She keeps them small, about seven students, and they learn to take a specimen from frozen to mounted in about nine hours (the fee, which runs $225-$265, includes all supplies, tools and, of course, the dead animal). Currently students are learning to taxidermy birds, but Markham hopes to expand to mammals in the future. She personally has taxidermied rodents and deer, and as soon as she has a bit more time, plans to work on her pet project: dogs.

In fact, the only thing she loves more than working with dead animals is playing with live ones. Markham has fostered 17 dogs in three years. Her “permanent” dog, Bacon, was a malnourished rescue. She was working on farm-raised squab at the time, so she took all the meat off the birds, boiled it, mixed it with rice and brought the Australian Shepherd mix back to health.

Never one to waste, Markham then mounted the pigeons.

Ethics and the environment are key factors to Markham. She collects or purchases specimens after natural or unavoidable death, and always discloses their origins to the students. To stuff the birds (a verb she never uses, as it’s considered déclassé in her world), she procures wood-wool spools from lumberyards. They’re a byproduct of the industry, castoff shavings of two-by-fours.

Markham also has a cheeky sense of humor. One frequently asked question on her website is, “I found a hawk. Will you taxidermy it for me?” The answer is no, and it turns out there are federal laws about this kind of thing, and only museums may mount protected or endangered animals. In a follow-up question pondering whether she could taxidermy an endangered animal on the “down-low,” she uses a Pulp Fiction reference: “Nope. I can’t even be aware you have it. Who is this? Prank caller! Prank caller!”

The laws, she notes, date to the Victorian era, when trappers nearly decimated the songbird population by killing them en masse for the plumage that they sold to haberdasheries for women’s bonnets. Some animals are protected because they’re native and you wouldn’t want to upset the ecosystem, she added. Conversely, European Starlings, which she uses in “Birds 101,” are considered  “nuisance animals” in that they attack crops and destroy nests of native birds.

Markham acquired her current round of Starlings, the most populous bird in North America, from a pest abatement business in Wisconsin.

As the budding taxidermists filed in to class, Markham’s assistant and the student who eyed the dead pigeon returned from Fifth and Spring streets victorious. The bird, sans a few feathers, was in surprisingly good shape for dive bombing the gutter. Markham dropped it in the freezer alongside a peacock and an 85-pound Irish Wolfhound (her friend’s beloved pet who died) that Markham wants to taxidermy as part of the dog project.

Student Linette McCown, a set decorator who met Markham when she mounted pigeons for an Annie Leibovitz photo shoot, has collected taxidermy for more than 10 years. She had always wanted to learn the skill, but couldn’t find any classes. Seated across from her, fingers deep into a Starling’s chest cavity, Nina Masuda said she, too, had searched unsuccessfully for classes. Then they found Markham.

When the students started, they wore gloves to pick through the bird’s carcass. They soon realized that they really needed to feel the animal to connect with the work.

“We’ve all gotten over the gross,” said McCown, of Highland Park. “Plus, they’ve been in the freezer, so as long as you don’t put it in your mouth, you’re fine.”

The room erupted in laughter, and the students, who were predominantly female on this day, agreed that the class had opened their eyes to wildlife. They, like Markham, now see animals in a wholly different way.