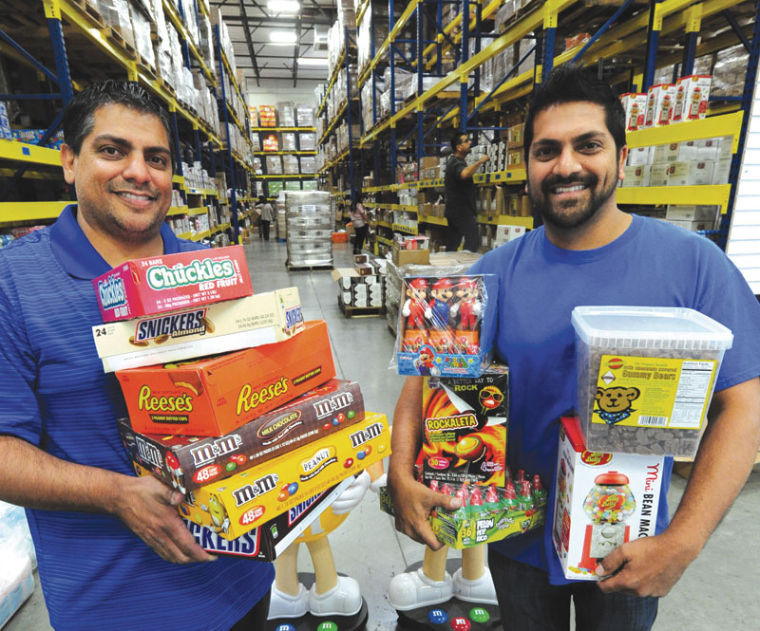 Minaz and Shafiq Ahamed in the new Downtown building for Jack’s Wholesale Candy & Toy Co. Their family bought the business in 1980 and, this month, the brothers opened a 42,000-square-foot headquarters. 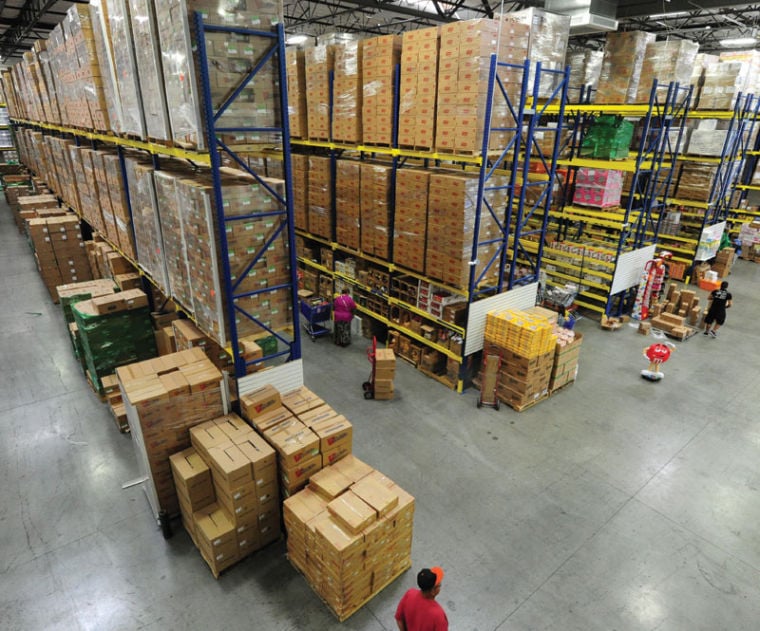 With more than 5,000 items, Jack’s has virtually every kind of sweet imaginable. The offerings run from M&Ms to candy cigarettes to Mexican candies.

Minaz and Shafiq Ahamed in the new Downtown building for Jack’s Wholesale Candy & Toy Co. Their family bought the business in 1980 and, this month, the brothers opened a 42,000-square-foot headquarters.

With more than 5,000 items, Jack’s has virtually every kind of sweet imaginable. The offerings run from M&Ms to candy cigarettes to Mexican candies.

That’s a fitting description for Jack’s Wholesale Candy & Toy Co., owned by brothers Minaz and Shafiq Ahamed, which is celebrating a new home in a freshly built, 42,000-square-foot structure in Downtown. Dwarfed by 20-foot high stacks of sweets, the Ahameds recently were readying the facility at 777 S. Central Ave. in anticipation of a June 5 grand opening.

The largest commercial candy store in Downtown Los Angeles, Jack’s carries some 5,000 items, with a variety of American and Mexican sweets. Shelves brim with bags and boxes of vintage treats such as ring pops and candy cigarettes. There are multicolored communion wafers and mainstream confections including Jawbreakers, M&Ms and Twix bars, as well as goods from the premium chocolate brands Ghirardelli and Lindt. The latter are a recent addition to the inventory, thanks to the new digs’ industrial air conditioner. Certain chocolate companies, the brothers explained, require strict temperature controls for their products.

Although just 200 feet from the original business at 1244 E. Eighth St., which the Ahameds’ father and uncle purchased in 1980, the new headquarters is twice the size. It also brings all of Jack’s operations under one roof, with a sales floor and a distribution facility complete with a loading dock. In opening the new building, the Ahameds closed their Vernon distribution plant. They would not reveal how much they paid for the property, which previously held seven small buildings, or for the construction of the new edifice.

Jack’s was named for Jack Levy, who in the 1930s began pushing a candy cart through the aisles of the produce markets in Downtown. He moved into a building on Eighth Street and sold candy there for about 30 years. He sold it to another family, who in turn sold it to the Ahameds 34 years ago.

Minaz and Shafiq’s father died and their uncle retired. Today, Minaz is the president and Shafiq serves as vice president. Although there has been no Jack in Jack’s for many decades, the brothers said the longevity of the business in Downtown is a reason not to change the moniker.

The new building is an effort to boost the business. The ceiling is 30 feet high, which allows the Ahameds to stack pallets in a way they couldn’t in their previous one-story buildings. Construction took seven months, they said, with 95% of all materials, brick and metal, for example, being recycled.

With that kind of history in the Central City, 14th District City Councilman José Huizar was happy to see the business expand.

“Jack’s Wholesale Candy & Toy Store has been a Downtown Los Angeles staple for decades, proving that excellent, reliable service mixed with a wide offering of delicious candy is a winning formula that transcends all eras,” he said in an email to Los Angeles Downtown News.

The Price Is Right

Although Jack’s is open to the general public for walk-in business, its biggest clients are national retail chains. It also services mom-and-pop shops and even mall carts and kiosks. As in Costco, the bulk offerings lower the per-item cost: Fifty Giant Pixy Stix are $13, for example, and a 30-count bag of Rockaleta lollipops (four layers of chili with a gumball center) costs $6. If purchased individually, prices would usually be about twice what Jack’s charges, Minaz said.

One unlikely group of clients for Jack’s is bar owners. The brothers noted that the proprietors purchase items such as Rock Candy, which they serve with fancy cocktails. The different flavored sugars add a splash of color to the drinks.

“They’ve got to have some reason to charge you $15 for a drink in Hollywood,” joked Shafiq.

Minaz, 36 and Shafiq, 41, grew up in the candy business, and chewed their way though mounds of sweet treats as kids (which explains why they’re not tempted every day by the copious confections surrounding them). Still, Minaz admitted he doesn’t go terribly long without chomping a Reese’s Peanut Butter Cup or some Swedish Fish.

Jack’s also twists with the times. Shafiq said a current trend is “candy by color,” with organizers of birthday parties, quinceaneras and graduation parties all opting for a variety of treats in a single hue. Jelly beans, gummy bears, licorice and even foiled milk chocolates are all available by color in Jack’s aisles.

On a recent afternoon, three mothers of students from Colfax Charter Elementary School in Valley Village pushed an overflowing cart between aisles and gasped at the vintage candies, taking them back to their own childhoods. Crissy Guerrero was tempted to buy the candy cigarettes and cocktail-shaped treats, but thought better of it for the fifth grade graduation party the women were preparing. They decided the candies would be more appropriate at their next adults-only gathering.

Sweets of all colors were heaped into the cart. Nickie Bryar noted the graduation theme was, “Oh, the Places You’ll Go,” so they wanted a variety of candies. The women said they heard about Jack’s from a friend and were thrilled to be able to buy everything, even some party supplies, at one place.

When asked what they thought of the cavernous candy store, Bryar quipped, “I want to live here.”