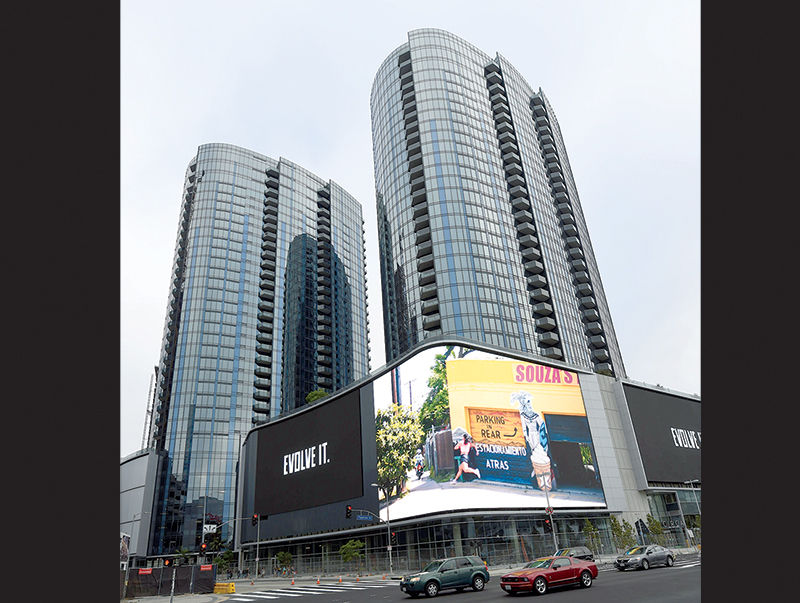 The new projects coming online in Downtown include Circa, a $500 million twin-tower effort with 648 apartments. As with many recent arrivals in the area, rates are in the vicinity of $4 a square foot. Move-ins started on Oct. 1. 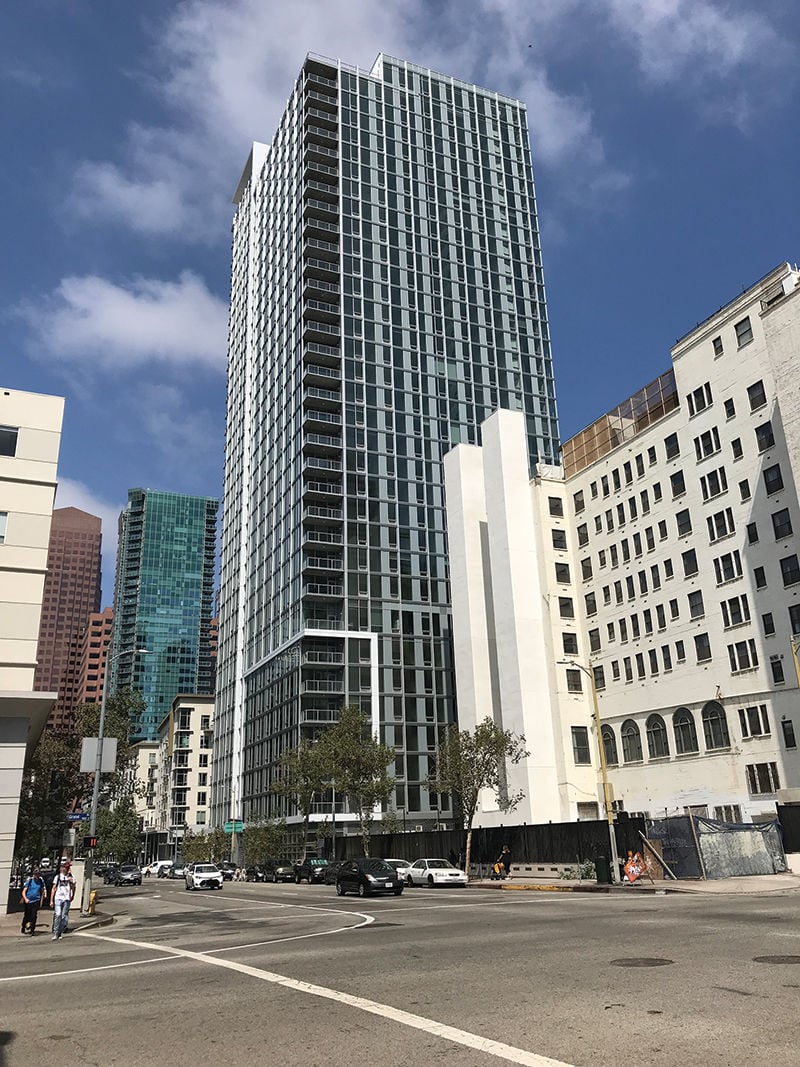 New to the scene is 888 at Grand Hope Park. The 34-story South Park tower has 534 apartments. It opened in September. 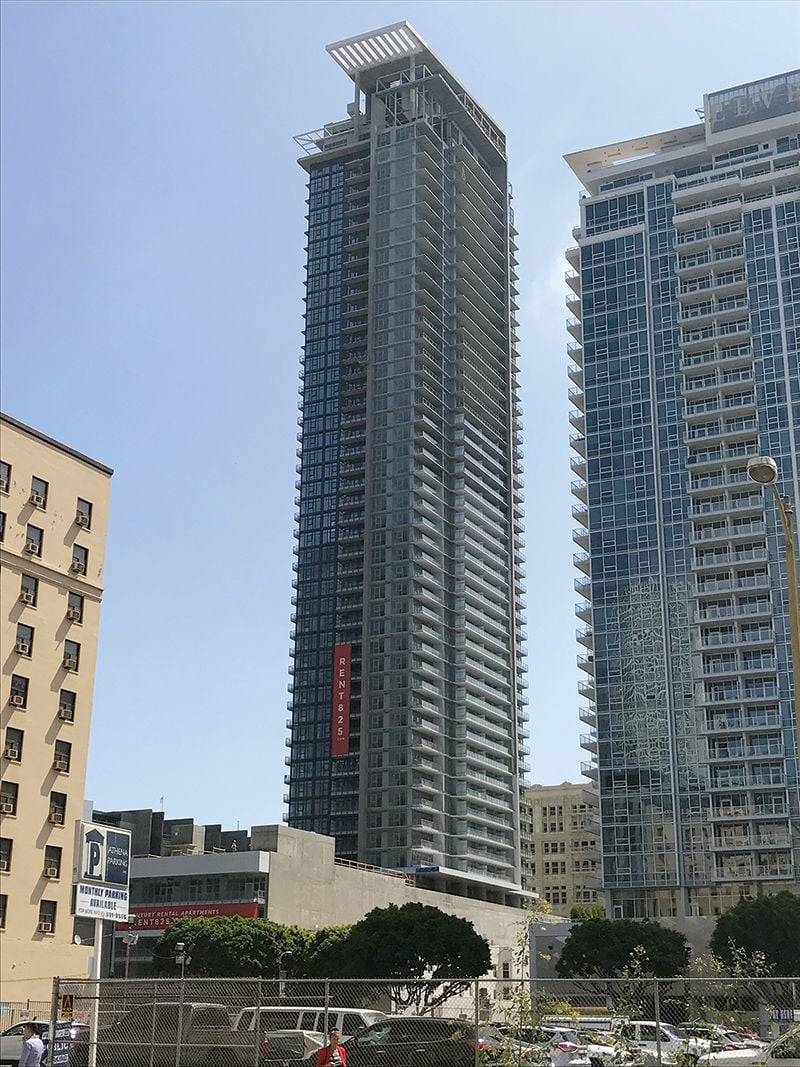 Developer Onni Group’s 825 South Hill is slated to open in the coming months.

DTLA - Recently, developer Mack Urban announced that move-ins for its upscale housing complex Aven will begin in January. The 38-story South Park tower will hold 536 studio to two-bedroom apartments, along with a collection of penthouses. Amenities will include two decks, a half-court basketball court, a lap pool, a dog park and, according to the project’s website, “the scent of citrus from our Orange and Lemon Tree grove.”

The project at 1120 S. Grand Ave. will likely target high-income individuals who work in the Financial District, South Park and other nearby neighborhoods. Like other major projects to open in recent years, a heavy marketing push is expected.

Aven will have plenty of competition. Downtown Los Angeles is in the midst of a six-month period in which eight major rental projects have opened or are scheduled to come online. This will add 3,307 residential units; all are market-rate.

Even more intriguing, all of the buildings are situated in a relatively compact area. The mix of high-rises and lower-slung structures are bounded by Eighth, 11th, Flower and Spring streets.

The crush of projects raises several issues, including how the developers will compete for tenants, what incentives will be offered, and what impact this will have on rents in both the short and long term.

“This will almost certainly cause a temporary spike in vacancies. It’s just hard to absorb that number of new units,” said Steve Basham, senior market analyst for real estate analytics firm CoStar. “So far though the indications have been good for Downtown. The projects delivered in 2015 and 2016 showed strong lease-up.”

Downtown has been in this situation before. The vacancy rate hit 12% in the middle of 2017, Basham said. Yet, he added, very few developments struggled with perennially empty apartments.

A vacancy spike is normal, according to Alex LiMandri, founder of the residential brokerage firm DTLA Life and an expert on the residential market in Downtown. Filling a building with 300 units doesn’t happen overnight, he pointed out.

When the vacancy rate ballooned — which, some observers stated, was misleading, as the limited number of Downtown housing units means a couple projects can skew the occupancy level — developers responded with incentives. Basham predicted that will happen again with this wave, and that while asking rates for apartments might not change, property owners could dangle lures such a year’s worth of free parking, or up to eight weeks of free rent. In the recent surge these types of incentives were common.

The last wave of openings was able to find tenants relatively quickly. According to CoStar the Downtown vacancy rate dropped to 6% this summer.

The Downtown Los Angeles residential scene has been rocketing forward for years. The Central City population today is estimated at 72,000, according to the Downtown Center Business Improvement District. By comparison, there were approximately 18,000 full-time residents back in 2000.

The projects that are hitting the market now are changing the look and feel of the area. One of the biggest players is developer Holland Partner Group, which is bringing 900 apartments online: Its pair of Historic Core towers, known as the Griffin on Spring and Grace on Spring, will deliver a total of 578 units to the intersection of Eighth and Spring streets. The Griffin arrived in October and the Grace will follow Nov. 15.

A third building from Holland Partner, Alina, is a 28-story tower at 712 W. Ninth St. Move-ins to the 341 apartments will start in December.

Tom Warren, head of development for Southern California for Holland Partner Group, does not seem overly worried. While he acknowledged that the plan was not initially to have its three towers open so close in time to one another, he thinks the buildings will quickly stabilize. He pointed to a pair of Holland Partner projects that opened in 2017: the Sofia, in City West, and Stoa, next to the former St. Vibiana’s cathedral, have almost 850 units between them. Both are nearly filled. The heart of Downtown continues to grow with new destinations, and that keeps demand strong, he added.

“The entire time we have been in development of Eighth and Spring, we have continued to see announcements of new retail and restaurants and amenities in the immediate vicinity,” Warren said. “We feel like this part of Downtown is the most exciting spot, the most rapidly changing spot.”

The two-tower Circa project at 1200 S. Figueroa St. was originally planned as condominiums and switched to rentals during the construction stage. Doors to the 648-apartment complex opened Oct. 1.

Still to come is Onni Group’s 53-story high-rise 825 South Hill, which will have 490 apartments. It has a late fall fall/early winter timeline.

In predicting the future, Dean Zander, executive vice president with the brokerage firm CBRE, looked at previous opening waves and existing Downtown buildings. He noted that some properties offer concessions for new tenants, but not on renewals.

The retention rate for buildings a year after opening was 60%, he said, higher than in many other parts of Los Angeles. Zander said the vibrancy of Downtown, including a busy nightlife scene, is keeping many new inhabitants in the neighborhood.

“What’s kind of exciting about it all is when developers try to out-amenitize each other,” Zander said.

The current collection of new projects has a variety of elements intended to entice renters. Many buildings include dog play areas, and also offer outdoor gathering spots with deck and grills. Axis on 11th has a fitness center and a residents’ lounge. Griffin on Spring provides a gym, rooftop lounge, business center and even a dry cleaning and laundry service. Circa boasts pool cabanas and a cycling studio, plus a lounge for pets.

The proximity of the new projects is exciting for Ellen Riotto, executive director of the South Park Business Improvement District. She said the BID has been preparing for this wave of openings and will expand its street cleaning and safety patrols in the neighborhood.

“We’re evaluating, and seeing if our deployment matches the rate of growth,” she said. “I don’t expect us to be overly taxed.”

LiMandri said that if the past residential openings is a precedent, then Downtown will see the market stabilize and vacancies return to normal within three or four months. The good news, he added, is that demand remains strong in Downtown, even with so much supply.