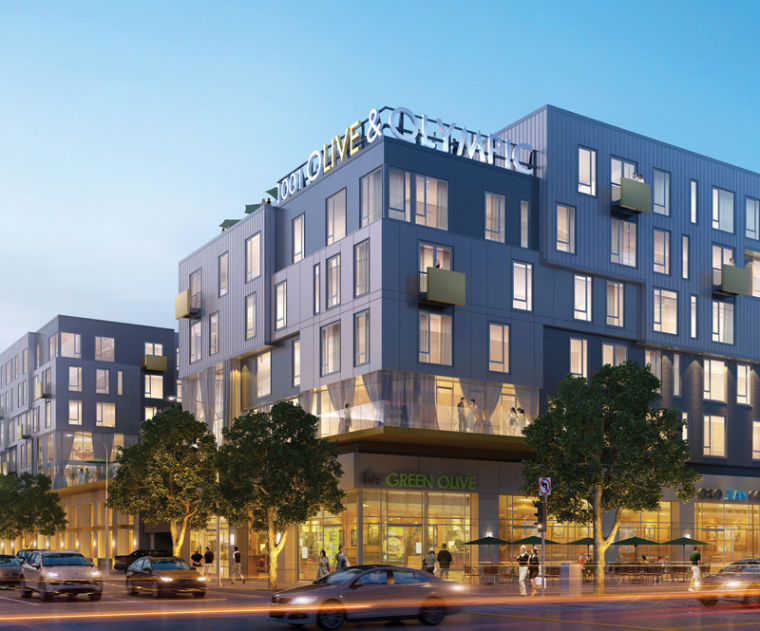 The Miami-based developer Lennar intends to build a 201-unit apartment complex on the southwest corner of Olympic Boulevard and Olive Street. It would be the real estate behemoth’s first project in Downtown. 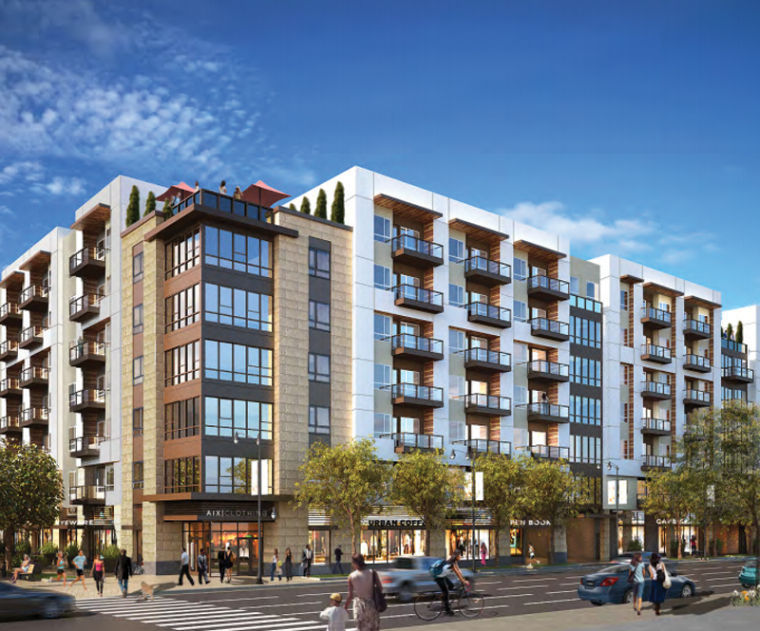 The Hanover Company, which opened the 717 Olympic apartments in 2008, is returning to Downtown with a 274-apartment project next to Lennar’s proposed building.

The Miami-based developer Lennar intends to build a 201-unit apartment complex on the southwest corner of Olympic Boulevard and Olive Street. It would be the real estate behemoth’s first project in Downtown.

The Hanover Company, which opened the 717 Olympic apartments in 2008, is returning to Downtown with a 274-apartment project next to Lennar’s proposed building.

DOWNTOWN LOS ANGELES - Downtown Los Angeles has been experiencing an apartment building boom in the past couple years, with a number of projects powered by national real estate companies that see an opportunity to cater to affluent residents in a tight rental market.

Now, in an unexpected coincidence, the trend is striking the block of Olympic Boulevard between Olive Street and Grand Avenue. Two developers with vast portfolios have unveiled plans to build seven-story structures with nearly 500 combined units. Both would also create street-level space for retail and commercial uses. (Scroll down for full plans)

Plans from the two developers, Lennar Multifamily and The Hanover Company, were presented to the Planning and Land Use Committee of the Downtown Los Angeles Neighborhood Council on Tuesday, Nov. 19. Although both developments are awaiting entitlements from the city, representatives of the projects said they hope to begin construction in the first half of 2014.

Although distinguished by the details of their size and design, the projects would transform a block of current parking lots into a vibrant streetscape. They would also continue a burst of building that is extending south from the Financial District.

Renderings of Lennar’s project reveal a sleek exterior design from architecture and planning group KTGY. The 201-unit building would have a variety of textured metallic panels, giving the articulated façade an ultra-modern feel. It would rise on the southwest corner of Olympic Boulevard and Olive Street and include about 4,100 square feet of retail space.

The plan from Miami-based Lennar proposes 64 studios, 109 one-bedroom and 28 two-bedroom units. Residences would range from roughly 450 to 1,250 square feet. It would be Lennar’s first project in Downtown Los Angeles.

In a shift from the usual Downtown proposal, the project would include 12 two-story townhomes running along Olive Street. Occupants would have direct access from the sidewalk.

“It’s an opportunity to give residents a unique living space that connects them to the street level,” Scott Rynders, Lennar’s vice president of development in California, told the DLANC committee. “We saw an interest in these townhomes and pursued that instead of more retail along the street.”

The retail and commercial space would run along Olympic Boulevard, and Rynders indicated in his presentation that it would likely be used for restaurants.

Two above-grade levels of parking and one subterranean level are planned, providing a total of 228 spaces.

Perhaps the most interesting features of the proposed building are its open-air amenities. Designs show a third-floor pool and spa deck overlooking Olive Street, while a sky deck at the corner of Olympic and Olive on the top floor would deliver expansive views of Downtown and South Los Angeles.

Plans also call for a courtyard on the north side of the building and, in a nod to another Downtown residential trend, a dog park on the east side of the property.

No budget for the project was revealed.

Houston-based Hanover is proposing a larger project immediately west of the Lennar site, with plans for 274 apartments and approximately 12,000 square feet of retail and commercial space on the ground floor.

The project on 1000 S. Grand Ave. joins another planned Hanover development at Olympic Boulevard and Hill Street; that would create 284 units. The company also built the apartment high-rise 717 Olympic, which opened in 2008 on the corner of Figueroa Street and Olympic Boulevard.

The new building would offer 35 studios, 146 one-bedroom apartments and 93 two-bedroom residences. The retail would wrap around Grand Avenue and Olympic Boulevard and feature outdoor seating, Jim Ries of consulting firm Craig Lawson and Co. told the DLANC panel. He also said that the project would include the planting of 69 trees in and around the property to beautify the area.

A street-level courtyard and paseo, meanwhile, would allow pedestrians and residents to walk through the property from Grand Avenue to the alley between the Hanover and Lennar projects.

Amenities would include a courtyard and outdoor pool on the second floor, as well as three sun decks on the seventh floor. There would be a total of approximately 19,500 square feet of open common space. The project would include 252 parking spaces for residents, 12 spaces for retail and 313 slots for bicycles.

The building design from TCA Architects again features an articulated façade that makes use of different construction materials, from metallic surfaces to stucco, brick and stone. Unlike the exterior of the Lennar project, TCA’s design features glass balconies on the majority of the street-side units.

“We were inspired by a lot of Parisian buildings that are six, seven stories tall and line the streets in the city center,” said TCA Studio Director Winston Chang.

Although Downtown advocates will welcome the arrival of more residents to patronize local restaurants and businesses, a possible conflict for both developments is that they sit within the boundaries of an area where 14th District City Councilman José Huizar wants to see more high-rises. Huizar is among a number of local officials and observers who have worried that the rush of six- and seven-story buildings on open parking lots will mean a lost chance to increase density in Downtown.

Huizar has proposed an 18-month moratorium on new low-slung buildings in certain Downtown corridors, including parts of South Park. The Hanover and Lennar projects fall in one of those areas.

Several members of DLANC’s Planning committee expressed concerns about the moratorium, also known as an interim control ordinance. Representatives of the developers, however, seemed unconcerned that the projects would run into problems.

The city Department of Planning is considering methods to grandfather in projects that are proposed before an ICO is enacted, assuming it is approved. Though representatives from Hanover declined to comment, Dale Goldsmith, land use counsel for Lennar and a partner at Armbruster, Goldsmith and Delvac, said he is optimistic about the projects’ futures.

“We raised these concerns with the [City Council’s] PLUM [Planning and Land Use Management] committee, and they seemed very receptive to the idea of grandfathering the project in,” he said.

Rick Coca, a spokesman for Huizar, said that the Planning Department will give its recommendations regarding grandfathering strategies, the ICO and high-rise incentives in mid-January.

Goldsmith also said that smaller projects are important for meeting the swelling demand for housing, which impacts rental rates and community growth in Downtown.

“It’s a well-executed project that will revitalize the streetscape, and it will meet the growing rental demand Downtown in a faster way than hypothetical high-rise projects, which the market aren’t quite right for,” he said.