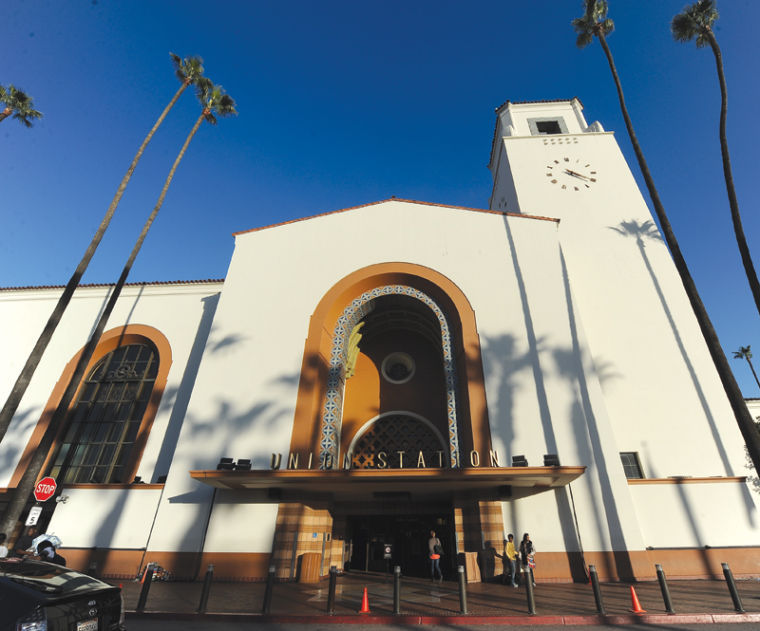 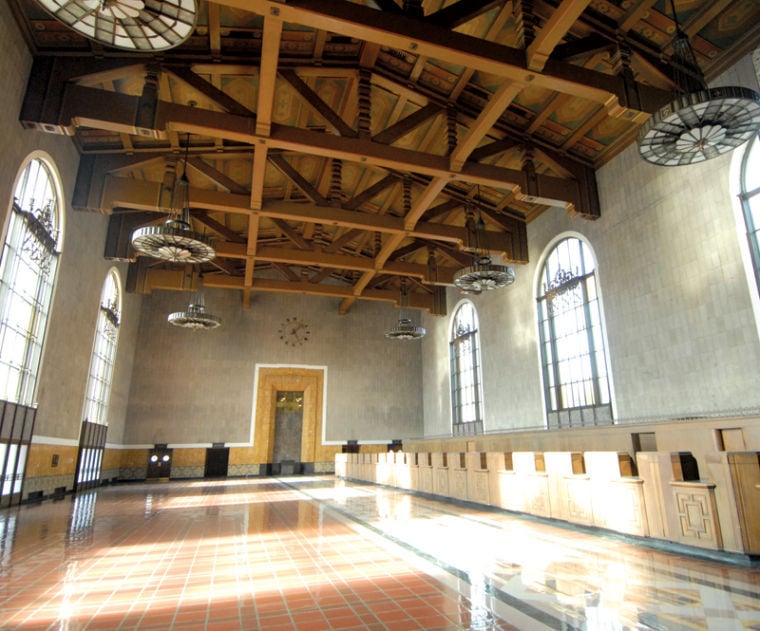 Union Station, and its old ticket concourse, looks nearly identical to when it opened in 1939. Station owner the Metropolitan Transportation Authority will celebrate the building’s 75th birthday on Saturday, May 3. 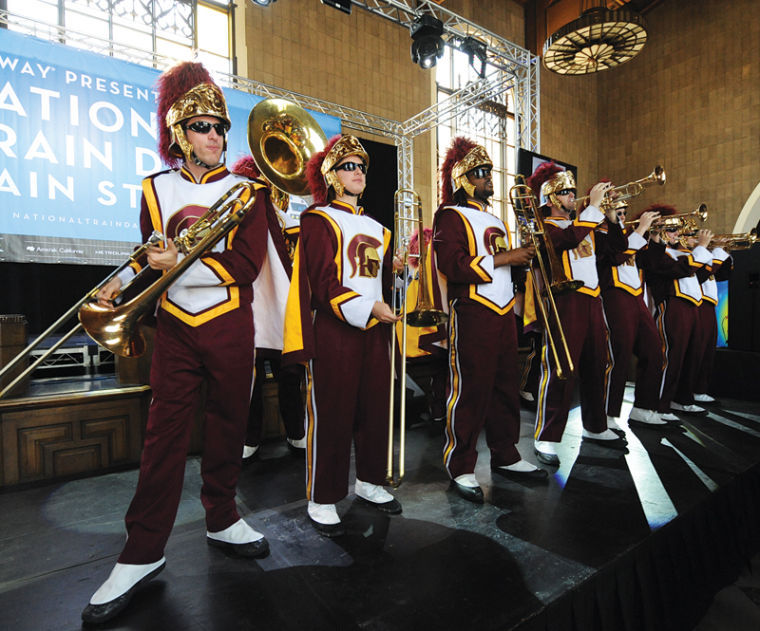 The May 3 celebration includes National Train Day, with a variety of displays and performances (the USC Marching Band has participated). Metro expects more than 10,000 people to attend.

Union Station, and its old ticket concourse, looks nearly identical to when it opened in 1939. Station owner the Metropolitan Transportation Authority will celebrate the building’s 75th birthday on Saturday, May 3.

The May 3 celebration includes National Train Day, with a variety of displays and performances (the USC Marching Band has participated). Metro expects more than 10,000 people to attend.

These are some of the most common adjectives used to describe Union Station, the Downtown transportation hub that debuted 75 years ago. On May 3, 1939, nearly half a million people stood in line for hours to watch as steam engines rolled down Alameda Street, celebrating the largest railroad passenger terminal in the West.

Seven decades later, the landmark is one of the last great railway stations, both because of its impressive architecture and its daily use as a regional transit center, said Art Leahy, CEO of station owner the Metropolitan Transportation Authority. To commemorate the milestone, Metro representatives have held a smattering of special events such as concerts and movie screenings at the station since last year.

On May 3, the actual anniversary, Union Station will host National Train Day, starting with a rededication of the building at 10 a.m. Activities, which continue through 4 p.m., will include one-of-a-kind railcar displays from Amtrak and more than a dozen musical acts performing jazz, blues and swing. There will also be a children’s theater performance and model train displays. Metro anticipates upwards of 10,000 people will attend.

To Leahy, a bus operator in the early 1970s whose Torrance route terminated at the transit hub at 800 Alameda St., Union Station is a “gem” that they continue to polish. Literally.

“It’s a wonderful place that gets more gorgeous by the day. Metal work that we thought was black was actually bronze,” he said of the ongoing effort to rehabilitate the facility.

Metro bought Union Station in 2011 for $75 million. The following year, the agency hired Gruen Associates and Grimshaw Architects to create a master plan for the future of the station and 40 surrounding acres of land.

Jenna Hornstock, deputy executive officer of countywide planning for Metro, said the agency spent eight months studying all facets of the facility. Proposing changes for the future required that they be respectful of the past, she said. Representatives are addressing how the station, and the surrounding land, can be used in a growing Downtown. Early concepts include bringing in more retail, restaurants, housing and office space.

Additionally, Metro is working to make the transit hub easier to use for the 75,000 people who pass through the station every day. Improvements that have already been made include a new message board in the waiting room and additional signage posted throughout the corridors to better direct travelers. Part of the master plan also involves widening the tunnel that leads pedestrians to the Metrolink and Amtrak rail lines, which is jammed with harried passengers during rush hour. The crowded pathway also connects the west and east ends of the station.

In 1939, Hornstock said, there were just three lines for passengers and freight. Today, Union Station is the center of L.A.’s transit universe,  with Metro rail and bus service, along with Amtrak and Metrolink lines.

One component of the past that Leahy is keen to bring into the future is the Fred Harvey Restaurant. Harvey created a chain of restaurants that, beginning in 1875, opened alongside railway stations. Leahy imagines turning the former eatery at Union Station into a nightspot. Although the proposal has been broached many times over the years, Leahy said he can picture people heading home from the theater or a Dodgers game and stopping in before catching the train.

As beloved as Union Station is today, it took the better part of two decades to get on track, said Marylyn Musicant, senior exhibitions coordinator at the Getty Research Institute. Musicant is overseeing the exhibit No Further West: The Story of Los Angeles Union Station, which opens at the Central Library on May 2. Organized by the Institute, the show examines the design process of the station, as well as the contentious politics behind it. No Further West runs through Aug. 10.

“The railroads didn’t want this,” Musicant said, noting that the Union Pacific, Southern Pacific and Santa Fe railroads each had their own modest station in the region. That led to a faceoff with city leaders who wanted an impressive, grand station, a symbol of Los Angeles’ prosperity and progress. Musicant added that safety was also an issue, as consolidating the tracks, rather than having trains crisscross the city, would be better for pedestrians, horse-drawn carriages and bicyclists.

In 1916, a number of surrounding cities filed complaints against the railroads, which started a two-year investigation that led to a 16-year fight. The railroads argued that Los Angeles was the end of the line, not a place where people transferred. The battle reached the U.S. Supreme Court before the railroads relented and agreed to build a unified station.

Still, there were repercussions. The city needed up to 60 acres of land. That led to the decision to build on what was then Chinatown. The community was razed and Union Station rose. Chinatown was moved to its current location.

Architects Donald and John Parkinson were tasked with designing a station that was unique to California. The Mission Revival-style building with mahogany walls and travertine tile cost $11 million, a hefty sum as the Depression was unfolding, Musicant said. However, the construction provided a lot of jobs at a time when few were available.

“The really unique thing is this gorgeous, iconic station still functions as the transit hub for the region, and continues to accommodate growth. It’s impressive,” Musicant said.

So, impressive, in fact, that sometimes Musicant, her husband and two sons will travel to Union Station just to walk around the 75-year-old building and explore, always looking for new discoveries. Not surprisingly, the Culver City residents take the train.