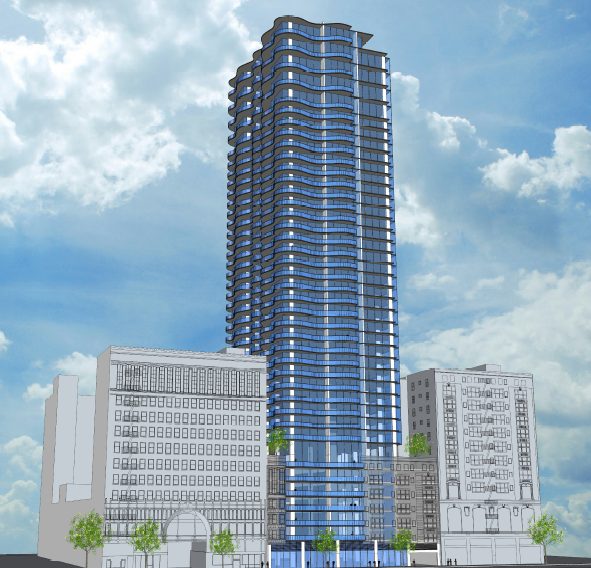 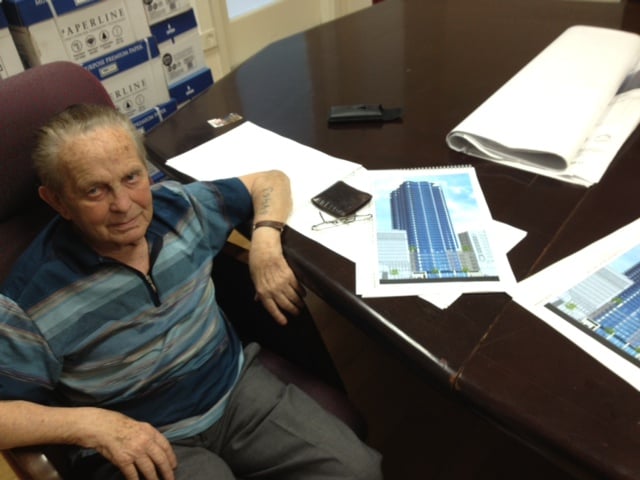 Veteran developer Joseph Hellen talks about scrapping plans for a low-rise structure between his Spring Arcade Building and the Alexandria Hotel in the Historic Core, and instead, erecting a 40-story high-rise.

Veteran developer Joseph Hellen talks about scrapping plans for a low-rise structure between his Spring Arcade Building and the Alexandria Hotel in the Historic Core, and instead, erecting a 40-story high-rise.

Joseph Hellen, a longtime Downtown landowner who in recent years has created nearly 300 apartments by turning century-old buildings into housing, has what he considers to be the perfect addition to the Historic Core: a 40-story residential tower that would rise between his Spring Arcade Building and the Alexandria Hotel.

The concept of erecting a steel and glass high-rise amidst mid-level early 20th structures might strike some as architecturally jarring, but the 87-year-old Holocaust survivor believes this is a defining time for Los Angeles, and if it wants to be considered a “world class city,” he said, it should exhibit world-class high-rises.

During an interview Tuesday in the offices of his Central City real estate and development firm, Downtown Management, Hellen described how he has scrapped various plans for the site that had been considered over the past eight years. In August 2012, he envisioned a 12-story apartment complex on the property in the 500 block of South Spring Street.

Instead, he has hired a new architecture team, Martinez + Cutri Corporation, which has worked up renderings for the mammoth structure that folks are more apt to see in South Park than the Historic Core.

“It is a show building for Los Angeles,” said Hellen, who spends most of his time in Melbourne, Australia, and travels to Downtown to oversee his business interests a few times a year.

Preliminary cost projections for the Spring Street apartment project’s basic core and shell are $120 million, with the likelihood of a much higher price tag depending on the quality of the residential finishes, Hellen said. The company is looking to create 252 units, which will be built to condominium specs, though the plan is initially to market them as apartments.

Known for financing his buildings out of his own pocket, Hellen said he is not seeking a construction loan at this time, and plans to use existing resources to fund the project.

The high-rise, which Hellen is calling the Stationer’s Building for the former stationery business that once occupied the now parking lot, will offer approximately 12,000 to 15,000 square feet of ground floor retail, along with six levels of parking. The rest of the structure would be residential.

A timeline for the project has not been announced. The development needs to secure entitlements from the city.

Hellen said he suspects he’ll keep the Stationer’s name for the building, In his past Downtown adaptive reuse projects, the Spring Arcade, Jewelry Trades and Chester Williams buildings, he has also utilized the historic monikers.

If Hellen gets the green light from the city, it would mark the first time that he has built from the ground-up in Downtown, instead of restoring an old property. In addition to the trio of apartment complexes that came online between 2010 and 2012, Hellen owns the Roxie, Cameo and Arcade theaters on Broadway, which currently operate as swap meets. Hellen, who made his fortune in real estate in Australia, bought most of his Downtown buildings in the early 1990s.

Renderings show the proposed Spring Street structure towering over its neighbors, markedly altering the streetscape and skyline. Though the design will undoubtedly raise eyebrows, Downtown Management Vice President Greg Martin said there is a precedent in Melbourne, where old colonial buildings coexist alongside high-rises that are 70 stories or more.

Hellen is not the only Downtown real estate veteran looking to go tall in the heart of the community. Izek Shomof, an early adaptive reuse developer who turned several old Spring Street buildings into housing, is working on creating a 22-story tower at Fourth Street and Broadway with about 400 units. Barry Shy, who has created hundreds of apartments in former Historic Core office structures, has plans for SB Omega, a 40-story tower that would rise at 601 S. Main St. It would have 350 apartments.

“The towers in Downtown define the city’s skyline, a landmark in the region and around the world,” Huizar stated in his motion.

Some in Downtown circles have worried that a rush of six- and seven-story apartment structures now in development could imperil a chance to increase density by building high-rises in one of the few Los Angeles communities that generally supports taller projects. In a recent Los Angeles Downtown News story, Shomof pointed out that as high-rises inch skyward, that can equate to more units, which add up to a better return.

“When you have a [40-story] building, you can break even in less than five years,’’ he said.

Hellen acknowledges that it may take a decade for the real estate community to recognize that he and other developers are on the ground floor of Downtown’s high-rise movement. He said he’s not worried about others eventually catching up.