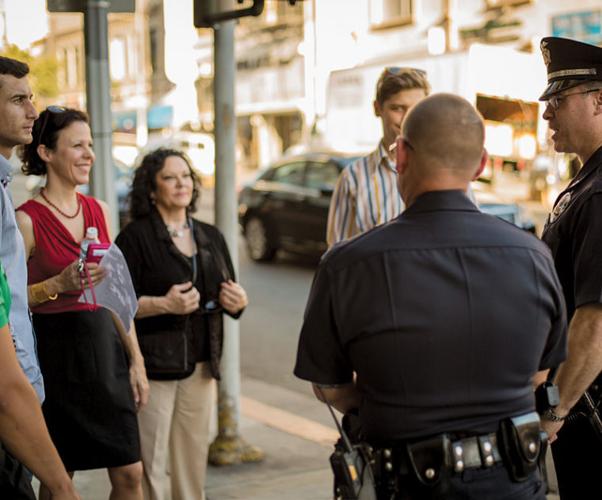 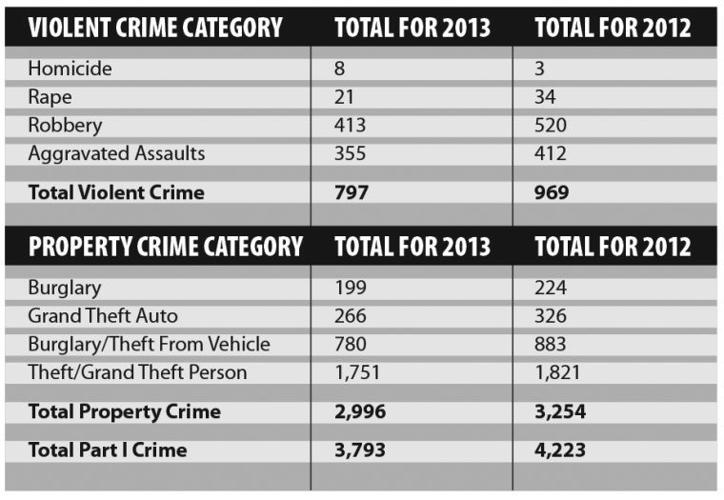 DOWNTOWN LOS ANGELES - In a dramatic about-face from 2012, Downtown last year saw a sharp decline in violent and property crime — except for homicide.

According to LAPD statistics, Downtown Los Angeles generally became a safer place in 2013. Last year, part one crimes — a category that includes all violent crimes and serious property-related offenses — dropped 10% across the board compared to 2012 in Central Division, which covers most of Downtown. Violent offenses alone decreased 18%.

Still, homicides jumped from three in 2012 to eight last year. Lt. Armando Munoz called the 2012 figure “an anomaly,” and said eight is a “normal year” for homicides in the area.

Most forms of property crime fell in Downtown in 2013. The sharpest decrease was the 38% reduction in theft from a person, which generally refers to robberies. Although there are still weekly reports of people leaving purses and cell phones unattended in their cars, theft from a vehicle dropped 12%, from 883 incidents in 2012 to 780 last year.

It marked the first time that overall crime fell in the Central City since 2010. In 2012, part one crimes had increased 12%, and violent incidents had gone up 5%.

Downtown’s numbers generally exceeded the reductions in crime seen in the rest of the city in 2013. According to LAPD statistics, violent crimes in Los Angeles fell by 11%, and property crimes dipped by 4%.

The Central City numbers even surpassed the department’s 3% reduction goal in part-one crimes set at the beginning of 2013, Munoz said.

Downtown leaders were especially cheered by the violent crime drop, from 969 reported incidents in 2012 to 797 in 2013. Central City Association and Downtown Center Business Improvement District President and CEO Carol Schatz said that after some spikes off and on over the last few years, the 2013 numbers are “wonderful.”

“I think these statistics prove what we’ve been saying for many years, that Downtown is safe and getting safer,” she said. Schatz also praised the BID safety officers who work closely with police on crime prevention and response.

LAPD Capt. Mike Oreb, who oversees the 425-officer Central Division, attributed the drop in crime to what he called a departure from traditional thinking. Two years ago, when Oreb first came to the station at Sixth and Maple streets to head the patrol division, he said the focus was on making arrests, as officials believed that a crackdown in areas such as Skid Row would ultimately reduce the number of people committing illegal acts.

Now, Oreb said, there’s nowhere to put those people following the state prison reform plan known as realignment. With AB 109, implemented in 2011, many non-violent criminals and other low-level offenders find themselves back on the street within days of an arrest.

Instead, Oreb said, officers have taken an approach of more visibility and fewer arrests. For example, when someone is caught drinking alcohol on the street, an officer might pour out the contents. Arresting the individual and processing them pulls the officer off the street for too long, he said.

Police visibility, Oreb said, is key to reducing crime. One of the first things he did in September 2013, after taking the reins from Capt. Horace Frank, who was promoted, was add Friday and Saturday night foot beats to a couple of highly trafficked pedestrian areas: Spring Street and the Seventh Street corridor between Hill and Figueroa streets. Daytime foot beats have been in place for some time now, with officers regularly walking around Fifth, from Main to Hill streets, and popping into Macy’s Plaza and FIGat7th.

Additionally, Oreb himself walks various Downtown neighborhoods about once a month to chat with folks about the problems they see and the concerns they have.

“It’s sheer teamwork on behalf of the officers that got us to this point,” he said. “Now we’re going to fine tune it and work on better community outreach and continue to test different methods for communicating with the public.”