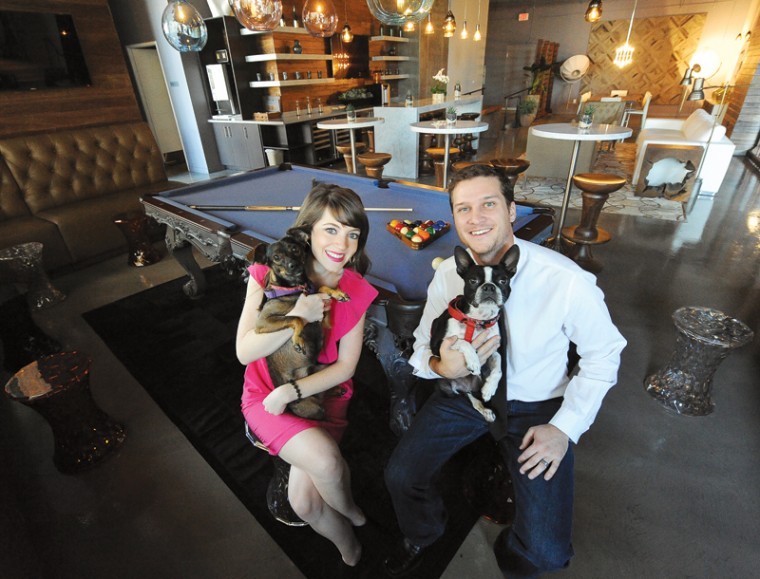 Julie and Kyle Partin with their dogs Java (left) and Rummy in the 2,000-square-foot lounge in the new apartment complex Apex. The couple just moved in to the 30-story South Park tower. 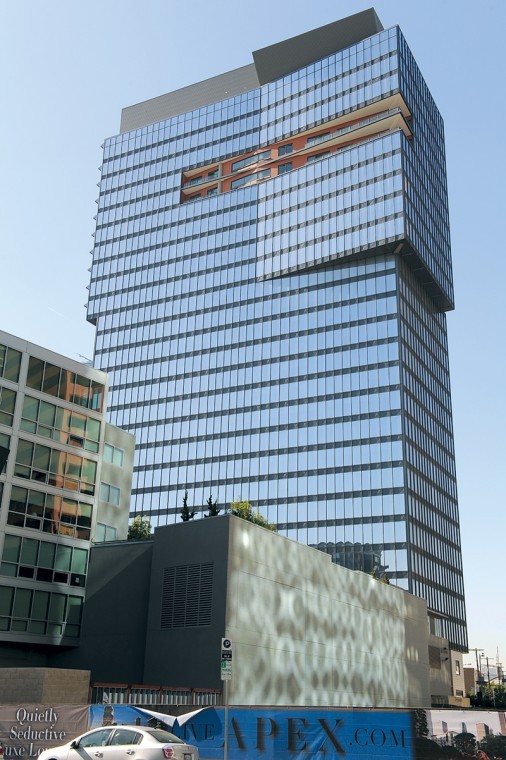 The project was originally planned as a condominium complex called Concerto. Developer Sonny Astani lost control of it when his lender went bankrupt during the recession. It is now owned by ST Residential, a division of Starwood Capital. 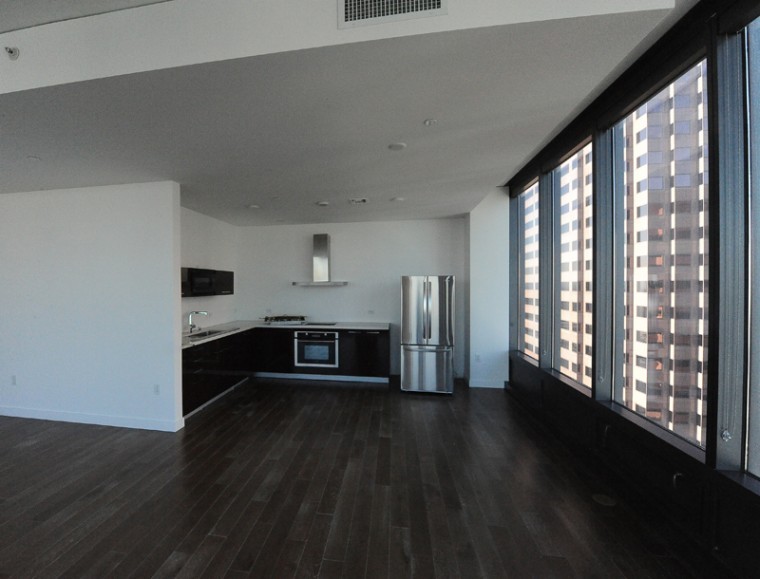 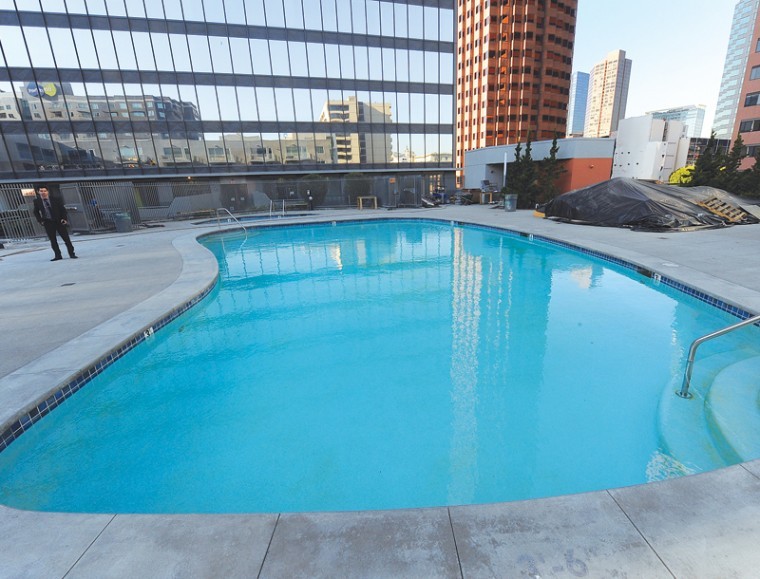 Julie and Kyle Partin with their dogs Java (left) and Rummy in the 2,000-square-foot lounge in the new apartment complex Apex. The couple just moved in to the 30-story South Park tower.

The project was originally planned as a condominium complex called Concerto. Developer Sonny Astani lost control of it when his lender went bankrupt during the recession. It is now owned by ST Residential, a division of Starwood Capital.

DOWNTOWN LOS ANGELES - Like most luxury high-rises, the recently opened Apex in South Park offers commanding views of the Downtown skyline. On clear days, residents can see the Hollywood Hills.

The sleek dark glass edifice, with portions that bolt out of the top floors, continues the evolution of the neighborhood as a hub for upscale living. It follows the 214-apartment Watermarke Tower, which opened in 2010, and 717 Olympic, a 151-unit building that came online in 2008.

The 30-story Apex is also something of a comeback story. It arrives years after a torturous process that frustrated its original developer. The building sat nearly completed, yet empty, for about two years.

Those factors may matter little to people moving into the property at 900 S. Figueroa St. Instead, they probably care more about amenities such as the hip lounge on the ground floor and the huge green space for furry tenants.

“We are already talking about parties we can host at that lounge,” said Kyle Partin, 26, who moved into a two-bedroom fifth floor apartment in the Apex last week with his wife Julie. “It looks like a Manhattan style bar or lounge. It’s nice, really nice.”

So far, about 10 apartments have been rented. Building owner ST Residential, a division of Starwood Capital, expects to have the 271-unit complex completely filled within a year.

Originally known as Concerto, the property was once part of a $190 million, three-phase condominium project from developer Sonny Astani. It included a seven-story annex, which is still known as the Concerto and was completed before the high-rise opened. The third building, another 30-story tower with 281 units, has not been built.

The seven-story Concerto annex sold out in August 2009, bringing in $31 million for Astani. However, the developer was enmeshed in problems with his lender, which went bankrupt during the nationwide recession. Efforts to secure help ultimately led nowhere. Eventually, Astani had to sell the project.

In February 2011, as part of a bankruptcy settlement deal, ST Residential took over the tower, which by then was almost complete.

“Internally it was basically finished units but lacking in a lot of the amenities,” said James Schumaker, vice president of marketing for ST Residential. “There were a lot of unfinished common areas that needed to be enhanced.”

ST Residential owns and manages rental and condominium properties in 10 states. In Los Angeles, in addition to Apex, the company owns the 186-unit Solair condominium building at 3785 Wilshire Blvd.

Initially planned as condominiums, Apex instead opened as a rental building. It is the first new luxury edifice in South Park since the Watermarke, which also endured financial upheaval (original developer Meruelo Maddux Properties lost it).

Although Apex currently holds the title of new kid in the neighborhood, it may not be that way for long. The tight Downtown Los Angeles housing market has led numerous developers to begin planning new apartment buildings.

Additionally, Onni Group, a Vancouver-based developer, is nearing a groundbreaking on a 32-story apartment tower at Ninth and Olive streets. The proposed $100 million project at 888 S. Olive St. calls for 283 apartments.

Of course, those projects are years from opening. Apex, say market observers, may have the perfect timing.

According to the 2012 Casden Multifamily Forecast from the USC Lusk Center for Real Estate, the strong Downtown-area rental market is expected to see rent increases this year.

“A sharp drop in new construction, the dwindling supply of shadow-market units, and improvements in the macro-economy have strengthened fundamentals on both the supply and demand side,” Casden Forecast author Tracey Seslen said in the April report.

It’s a trend Schumaker is counting on.

“To this day, the multifamily market is very strong, rent rates continue to climb and it’s supportive of the best use for [Apex],” he said.

He expects the building to attract a young professional crowd. He envisions residents in their 30s and 40s who work Downtown and want to live nearby.

“There’s also a chance that we’ll also see some empty nesters looking for a high-rise urban experience and maybe even a second home for high net-worth families,” he said.

Apex is in a busy area. The Ralphs Fresh Fare grocery store is in the Market Lofts building one block to the northeast. Apex is also two blocks south of the recently opened City Target. It is just up the street from L.A. Live and Staples Center.

Residents who park in the 966-space garage that also serves the Concerto Lofts (and the third structure if it’s completed) enter the building through the third floor.

The level holds a “quiet lounge” equipped with flat screen TVs, couches, banquette seating and an eight-person conference center. There is also a small theater where residents can watch movies on a 96-inch projector screen.

The one- to three-bedroom residences come with hardwood floors, washers and dryers, stainless steel appliances and the option to paint one of the plain white walls from an approved color list.

The units also feature large windows that almost stretch from the floor to the ceiling. A pullout section on a platform at the base of the windows opens to allow fresh air in the units.

The hallways are simple, with white walls and dark carpeting. The building shares a pool with the Concerto and a 2,000-square-foot fitness center is under construction on the pool deck.

The highlight of the common areas is what building officials term the Live Here Lounge. The 2,000-square-foot space that was originally intended for commercial use was instead transformed into a stylish gathering place. Building manager Paul Chambers termed it “the focal point of Apex.”

Those who enter the building’s small lobby and turn left toward the lounge may at first confuse it for a restaurant or bar. It contains leather couches and cowhide chairs. A large wooden wall unit with a flat screen TV and dozens of books covers one side. A wooden chess set rests on a small table next to a wooden Scrabble game.

A leather banquette wraps around one wall that faces a large kitchen and an eight-person dining table.

Schumaker noted that turning the space into a store or restaurant would have contributed to the bottom line. However, he said using it as a lounge fits with the ST Residential identity.

Some residents might find a building amenity that eclipses the lounge — the project has a 7,000-square-foot street-level dog park.

That was one of the elements that lured the Partins to the building. They have two dogs, Rummy, a Boston Terrier, and Java, a mixed breed.

“We love this huge dog park,” Kyle Partin said. “We came here and all the neighbors have dogs, so this is the perfect building for us.”

A large ceramic fire hydrant will soon be installed at the park. There are no plans yet for the third phase of the original Concerto project, Schumaker said.