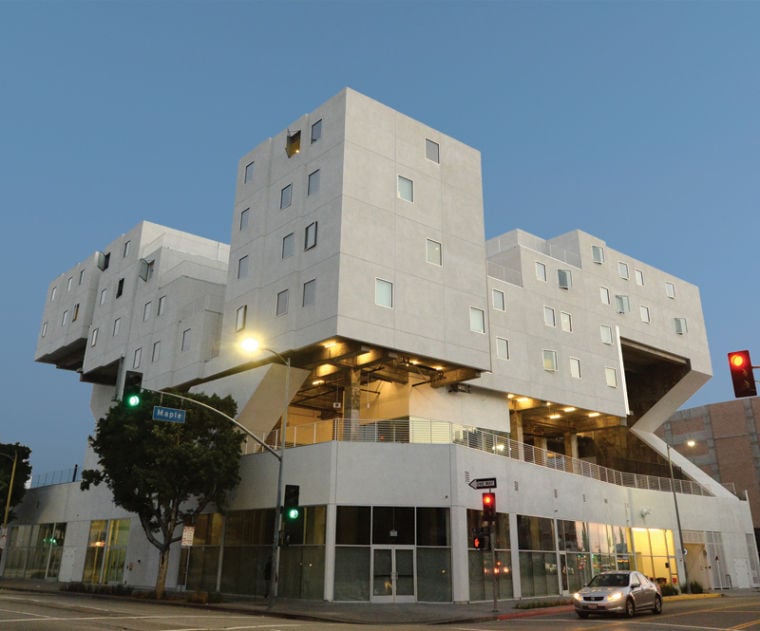 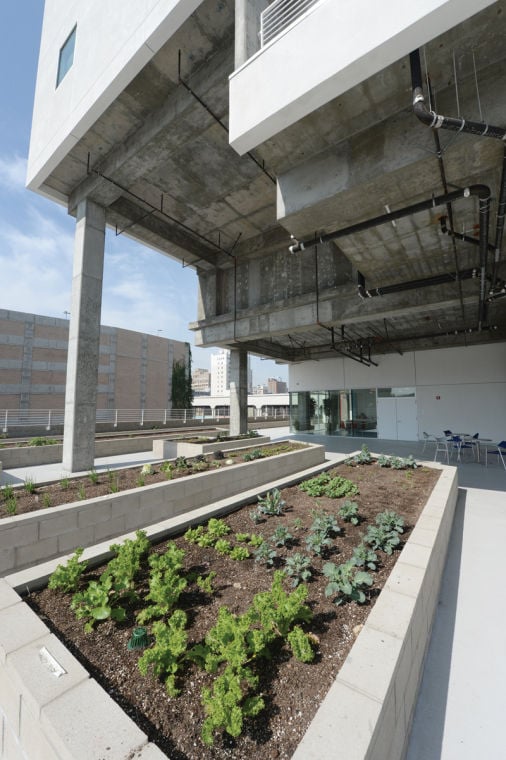 The project includes 15,000 square feet of community space with an outdoor deck, garden, basketball court and a running track. 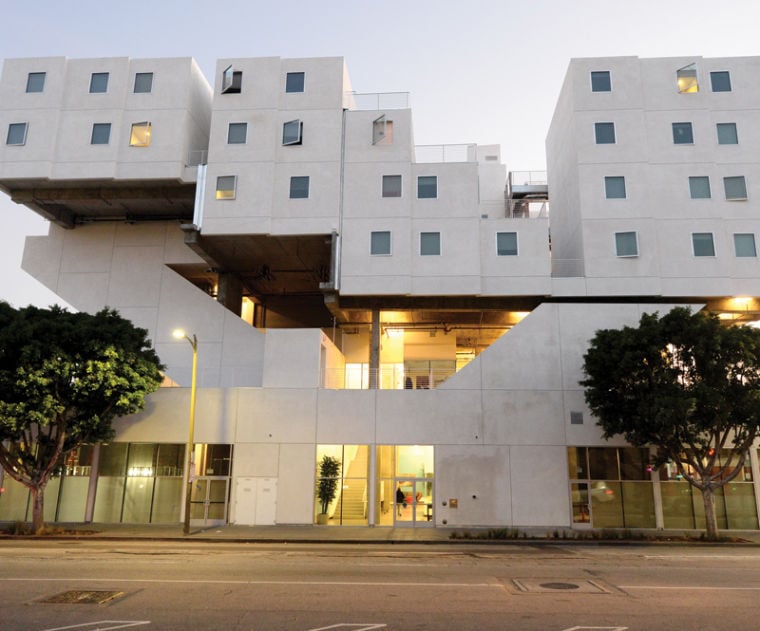 The Star Apartments, designed by Michael Maltzan, assembled 102 prefabricated units constructed in Idaho and shipped to Los Angeles. They were lowered by crane onto a concrete structure at Sixth and Maple streets.

The project includes 15,000 square feet of community space with an outdoor deck, garden, basketball court and a running track.

The Star Apartments, designed by Michael Maltzan, assembled 102 prefabricated units constructed in Idaho and shipped to Los Angeles. They were lowered by crane onto a concrete structure at Sixth and Maple streets.

DOWNTOWN LOS ANGELES - Skid Row’s new Star Apartments may be affordable housing for the formerly homeless, but with its angular concrete supports in the middle of the building and the levels that seem to float in space, it is also one of the most striking structures to sprout in Downtown.

“We like the idea of building iconic structures that give residents a sense of pride in their home, and this is an important building for the community,” said Dana Trujillo, housing development director at Skid Row Housing Trust, which developed the $21 million complex at 240 E. Sixth St.

Despite the aesthetic highlights, the Michael Maltzan-designed building’s most intriguing element hides beneath its skin: It’s the first and only low-income project in Downtown to be designed with prefabricated construction. Instead of building each level from floor to ceiling, the 102 units were assembled in Idaho by Guerdon Enterprises — complete with toilets, appliances and cabinets installed — and then trucked to Los Angeles, where they were lifted by crane into place on a concrete structure.

“They arrived as cubes with just the little utility connections sticking out,” said Sasha Truong, project manager on the Star.

The Star, which broke ground in early 2012 and began move-ins late last year, provides approximately 350-square-foot residences for people identified by the county as being the “most vulnerable,” often requiring emergency medical care and having a history of chronic homelessness. Each resident pays 30% of their income (or nothing if they have no income). Rents are subsidized by the city Housing Authority.

The project follows the permanent supportive housing model with a swath of on-site amenities and services, everything from offices for counseling and case management to an upcoming primary care clinic run by the county Department of Health Services. There is also a 15,000-square-foot open-air deck on the second floor.

The deck has space for exercise and art, as well as a lounge with comfortable leather chairs. A large kitchen and dining room provide space for lessons on cooking and diet, which will take advantage of the vegetables and fruits in the community garden just steps away. Last week, rows of bright red and yellow Swiss chard were growing next to radishes and a bevy of herbs.

“The building is very much a response to Skid Row Housing Trust’s ambition to create the next generation of permanent supportive housing,” said Maltzan, whose credits include a number of for-profit projects, including the upcoming $160 million One Santa Fe in the Arts District.

Sitting on a Tray

Other Star amenities are coming, including a running track funded by the Aileen Getty Foundation. More significantly, the deck serves as a sort of experiment for SRHT. In addition to Star residents, it will be open to inhabitants of the organization’s two dozen other Downtown properties.

It will likely happen in phases, Trujillo said, as SRHT has no idea how many people will show up and when.

“It could be a matter of scheduling different hours for residents from certain buildings to come by, but regardless, nearby residents are really excited to explore the space,” she stated.

The prefabricated units are not the only unique thing about the construction. The original property was a one-story building, and instead of tearing it down, the design simply poured a concrete super-structure over it, creating the large deck in the process. The units sit on a “tray” elevated by the structure’s distinct angular concrete pillars.

The prefabrication approach improves the project’s sustainability by eliminating much of the construction waste. Additionally, the units feature energy-efficient appliances and air-filtration systems. The stacking also results in improved insulation as the walls, floors and ceilings are essentially doubled up. Those achievements have propelled SRHT to apply for a LEED Platinum designation for the building.

Still, things were not always easy. While the developer saved money using prefabricated units, the design’s complexity increased spending on installation. Despite that price hike, Trujillo classified it as a positive experience, and said other organizations and developers have been calling to glean information about how to pursue prefabricated construction.

“If we can get our costs of construction down and build more units for more people, that’s a fabulous outcome,” Trujillo said. “We were happy to be the guinea pig even with the bumps and uphill climb.”

Meanwhile, the design is earning nods of approval. Will Wright, director of government and public affairs for the American Institute of Architects Los Angeles, lives a block from the Star and said the building’s arrival does much to enliven the neighborhood, especially considering the drabness of the LAPD Central Division headquarters and a Department of Water and Power building across the street.

“Maltzan and his team took a difficult site and added a sense of urban grace to an area that desperately needs more love,” Wright said in an email.

Although the Star may prove precedent-setting in terms of design, the developer understands that future projects won’t necessarily be easier.

With the Downtown real estate market heating up, Trujillo and SRHT Executive Director Mike Alvidrez worry that it will get progressively tougher to find sites and build in a financially viable manner. The Star suffered its own setback, after all: While the land was acquired in 2006, the recession pushed construction back until 2012.

But the success of the Star, as well as SRHT’s ongoing development of two other projects, bode well for the homeless community in Downtown, Alvidrez said.

“The Star is a catalyst for demonstrating creative solutions for ending homelessness, and in doing so multiplies the aspirational impact of this issue well beyond a single project,” he said.

In that sense, there’s optimism that Skid Row, and Downtown as a whole, will see more stars soon.

A previous version of this article incorrectly stated that rents for Star Apartments were subsidized by the county Housing Authority. The subsidies come from the Housing Authority of the City of Los Angeles. Downtown News regrets the error.