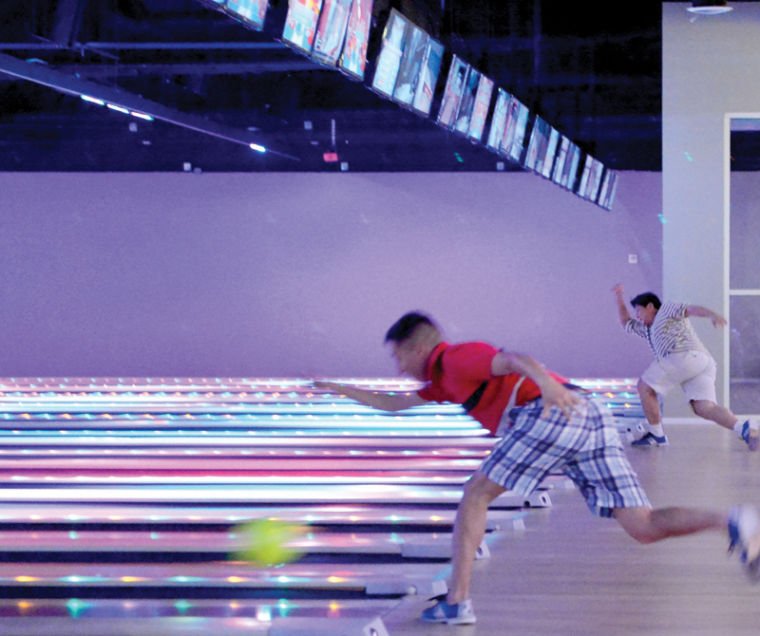 The Little Tokyo Galleria has a high-tech tenant in X Lanes. 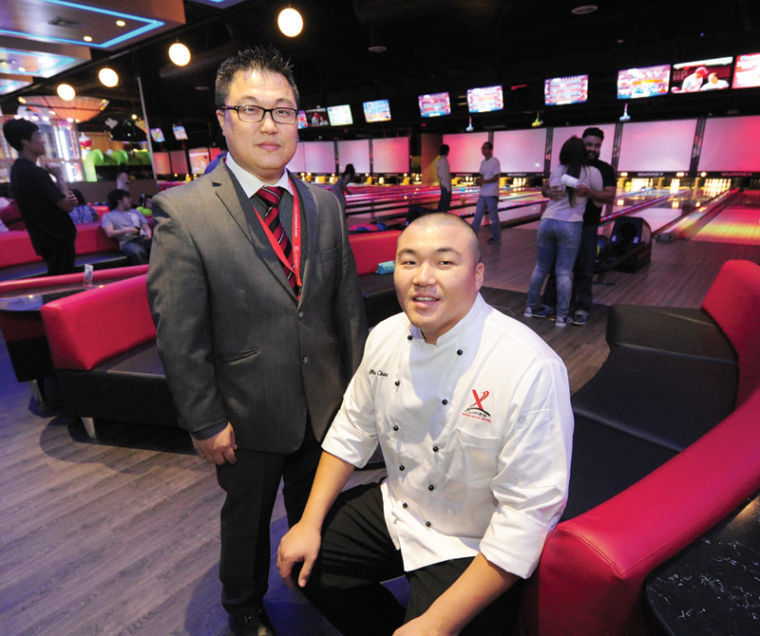 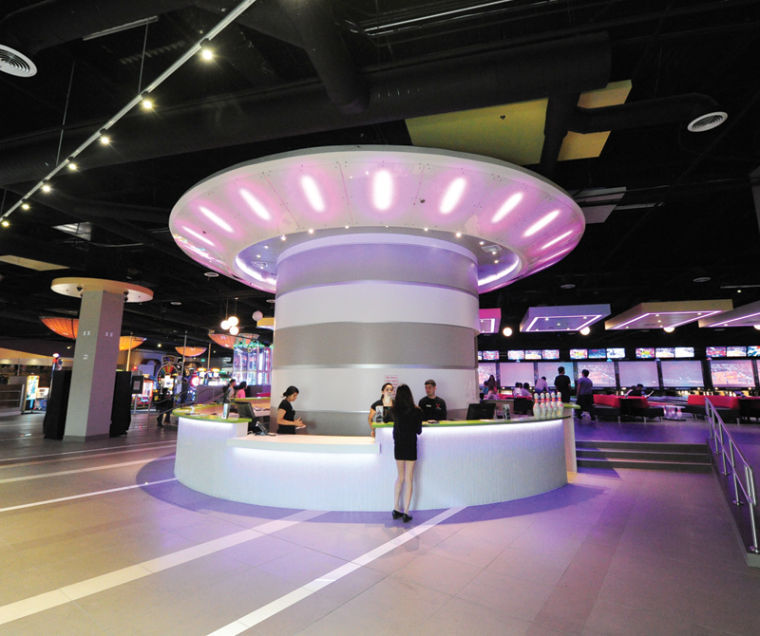 A central section is known as the Homerun area. “It kind of has a UFO look to it,” said Moses Chun. 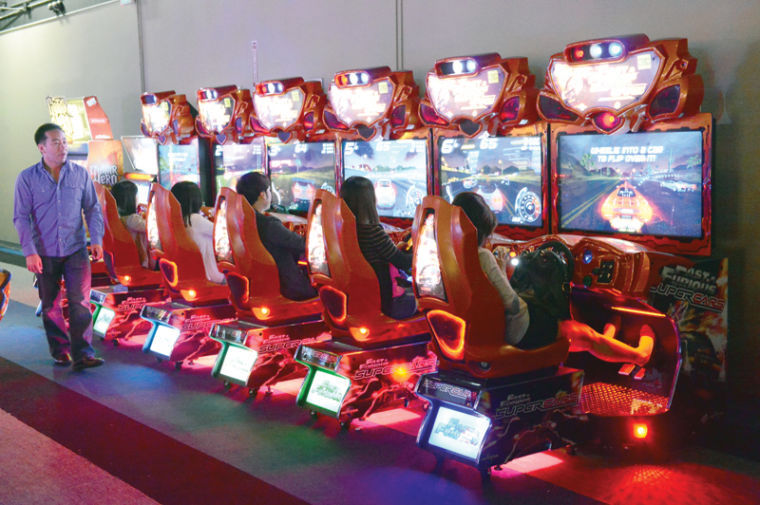 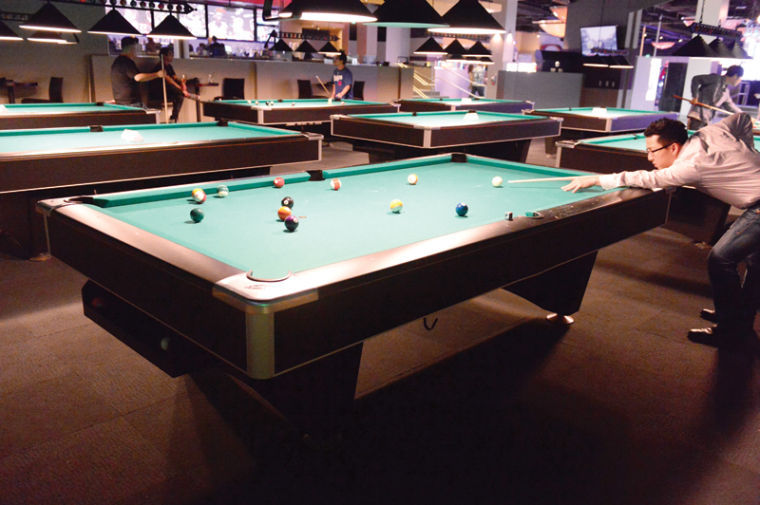 The Little Tokyo Galleria has a high-tech tenant in X Lanes.

A central section is known as the Homerun area. “It kind of has a UFO look to it,” said Moses Chun.

DOWNTOWN LOS ANGELES - For years, the Little Tokyo Galleria has been something of a gray elephant in Downtown. The massive complex at Third and Alameda streets is regularly derided for its insular, fortress-like design. Inside, it has long been plagued by empty space, with only a few shops, sushi spots and the cream puffs of Beard Papa’s drawing attention.

Now, things are changing. X Lanes, a 50,000-square-foot bowling alley and entertainment center, opened May 17 as the centerpiece of an ongoing renovation. The $6 million attraction is the first major step in bringing younger customers to the 28-year-old mall.

“Little by little, we’re turning into a location where more people will want to come,” said Jay Chun, CEO and director of operations of X Lanes.

Like Lucky Strike at L.A. Live, which opened in 2009, X Lanes is more than just a place for bowling diehards to throw balls at pins. In addition to a 24-lane bowling alley, it has a 150-seat Italian/American restaurant, a sports bar, a nine-table billiard room, three private rooms for parties and a 100-game video arcade.

Work on the bowling alley began about two years ago, following the 2008 purchase of the building by a group of Korean American investors. Although the structure had held a bowling alley when it originally opened, the buyers knew a repeat of the past was no guarantee of success.

“Having just a bowling alley in this current economic situation wouldn’t make sense,” Chun remarked during a recent afternoon tour. “We wanted to bring a lot more.”

Chun is running the venue with his younger brother Moses. He said that before the renovation, the space, which sat behind a large metal roll-down door, had been empty for more than a decade. Other past occupants included a Coco’s restaurant.

According to a 1992 article in the Los Angeles Times, Little Tokyo Bowl opened with the mall in 1985. It closed on a Saturday in October of 1992 without much fanfare or explanation.

When the original bowling alley closed at the complex then called Yaohan Plaza, it was home to dozens of leagues. Brian Kito, a longtime Little Tokyo business owner and a member of one of those leagues, recalled a simple, no-nonsense facility with a store that sold some bowling accessories.

“It served a really good purpose back then and a lot of people really missed coming there when it closed,” he said.

Kito hasn’t been to X Lanes yet, but he plans on taking his 12-year-old son soon. When he does, his son will see a very different place than where his father bowled.

The renovation transformed the cavernous space into a club-like venue illuminated by more than 3,000 colorful LED lights. A wide hallway leads to the restaurant on the right side. Just past the restaurant door, the view opens to reveal the entire space, which can hold 1,300 people.

A sort of restaurant patio area sits above the hallway. There are circular ottomans between tables and chairs, allowing people to hang out and watch the bowlers. Behind glass walls is a banquet room. Next to that is an open area where the pool tables are located.

As with seemingly every modern bowling alley, there are high-tech touches and comfortable decor. At the top of the lanes, players sit on vinyl brown and red curved couches that flank short glass tables. Bowling pins serve as the base for the tables.

Projection screens at the end of every lane can broadcast sporting events or be programed with abstract images and lights that are synchronized with the music that comes from the more than 200 speakers in X Lanes. Above the projection screens are dozens of flat screen TVs. Brightly colored bowling balls are stacked at one end of the bowling area.

The sports bar is also filled with LED lights that change colors. The arcade area is jammed with a mix of games, everything from pop-a-shot basketball hoops to skeeball to video games.

In the center of it all is a cylinder-like structure that stretches to the roof. It’s called the Homerun area, and is where people can rent shoes. It is also where X Lanes staff operate the lights, music and TVs.

“It kind of has a UFO look to it, but we wanted to have a focal point here,” Moses Chun said.

Craig Ishii, the 28-year-old executive director of the Little Tokyo-based Kizuna, an organization that works to encourage activism in Japanese American youth, said the bowling alley is exciting news for Little Tokyo.

“Little Tokyo is evolving, and as much as we talk about preservation in Little Tokyo, it doesn’t always mean keeping it the same. This will bring a level of vitality to Little Tokyo,” he said.

Although bowling is the most noticeable addition to the mall, it is neither the first nor the last arrival.

About three years ago, the Pho Shop opened on the third floor. In 2011 it was joined by Manna Korean BBQ. In December an outpost of Tom N Toms Coffee, a Korea-based chain, opened on the ground floor of the shopping center near the Third Street entrance.

There are holdovers to the past, though some of those have seen change. The supermarket in the building today is a Woori Market, part of a Korean grocery chain. It succeeded the Little Tokyo Market Place, which itself had replaced the former Japanese-oriented Mitsuwa Marketplace.

Jay Chun said three more restaurants may come to the mall, but there is no timeline yet on when they would open. He would not identify them. He said that plans to create a permanent space for Wolvesmouth, a dinner series run by popular young chef Craig Thornton, did not come together.

Although the new bowling alley is modern and bright, the exterior of the mall remains gray, dull and, yes, fortress like.

Chun said the owners are planning to liven it up a bit, and will spend about $300,000. That will bring cosmetic changes that may include new materials placed on the walls to break up the dull design.

While that may be more limited than what some neighbors want, Chun said that after years of relative quiet in the building, people are really surprised by what has arrived.

“I’ve been saying that if you come in here and I don’t get a ‘Wow’ from you, I will buy you dinner,” he joked.

He hasn’t bought anyone dinner yet.