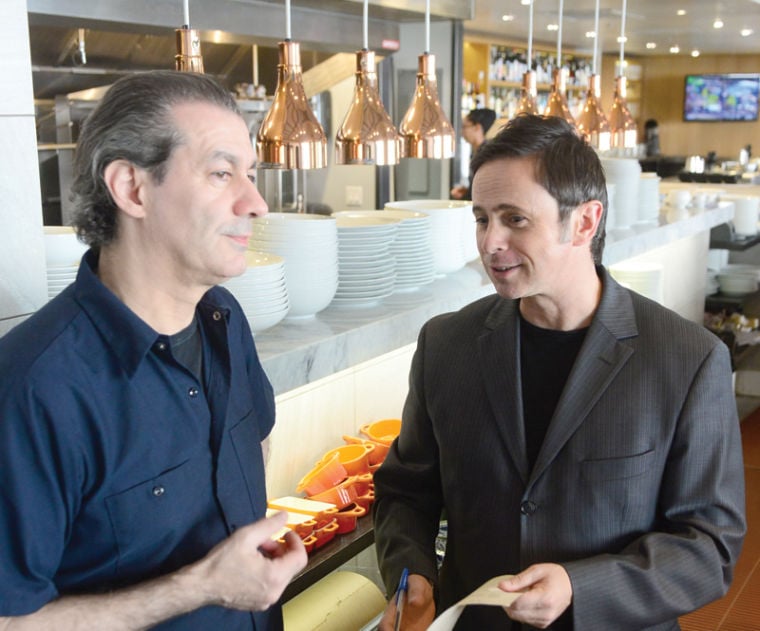 The Factory Kitchen, which opened Oct. 31 in the Arts District, reunites owner Matteo Ferdinandi (right) and chef Angelo Auriana, who are longtime friends. 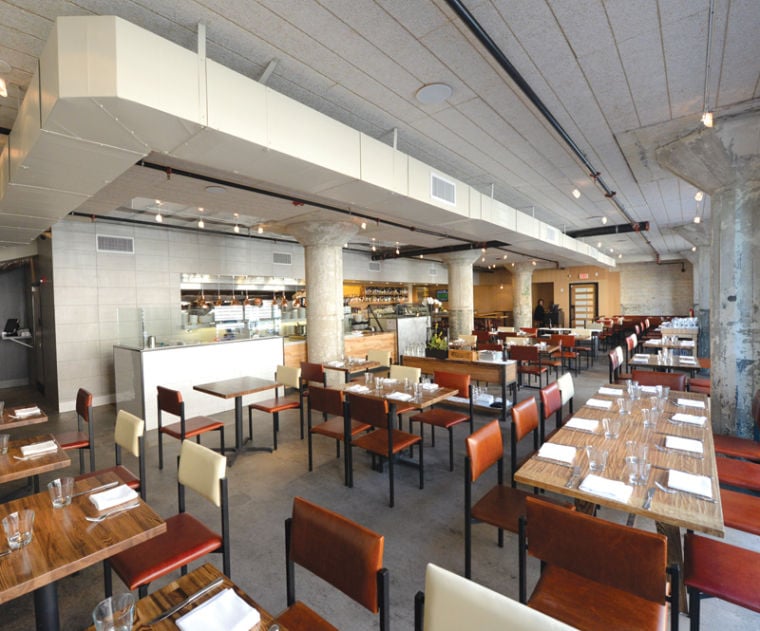 The 60-seat establishment is in an off-the-beaten track part of the Arts District.

The Factory Kitchen, which opened Oct. 31 in the Arts District, reunites owner Matteo Ferdinandi (right) and chef Angelo Auriana, who are longtime friends.

The 60-seat establishment is in an off-the-beaten track part of the Arts District.

The dish, focaccina calda di Recco al formaggio, reveals nothing to non-Italian speakers. Made by layering a young cheese called crescenza between two ethereal sheets of dough, then baking it fast in a roaring oven, the focaccina arrives blistered and crisp and dripping with richness.

Not only is it something that most customers won’t recognize, it’s a dish that Factory Kitchen owner Matteo Ferdinandi wasn’t aware of until the restaurant at 1300 Factory Place was deep in the planning stage.

“Who knew about this? I didn’t,” Ferdinandi said last week during a visit to the 2,960-square-foot space. “It’s literally from the town of Recco, and people outside of the area don’t make it.”

The focaccina is the brainchild of Ferdinandi’s old friend and Factory Kitchen chef Angelo Auriana, who helms the open kitchen. Their partnership has been a long time coming, Ferdinandi said, as they met in the mid-’90s and kept in touch. Today, the focaccina sums up their philosophy for the restaurant: to serve food rooted in the local traditions of Italian cuisine, a sort of flashback to the dishes that each explored independently as young men with big dreams of working in America.

Ferdinandi grew up in Venice, while Auriana was raised in the city of Bergamo, just northeast of Milan. The duo today joke that they rely on each other to discover the vastly different types of Italian cuisine in their hometowns.

“Matteo came to me to eat rabbit and polenta, and I went to Venice for seafood risotto and fried calamari,” Auriana said.

The Factory Kitchen sits on a narrow road off Alameda Street, tucked into the bottom floor of the residential Factory Place Arts Complex. The restaurant serves dinner seven days a week. Lunch service, which runs between 11:30 a.m. and 2:30 p.m., begins on Monday, Nov. 18.

Inside, wooden tables and red leather chairs splay out around the building’s stout concrete columns. An open kitchen and pasta station, where cooks roll out and cut dough into delicate shapes, offers diners a behind-the-scenes look into their meals.

The industrial setting is reminiscent of Bestia, the hard-to-find Italian establishment that opened in late 2012 in the 2121 Lofts complex off Seventh Street. Despite its tricky location, Bestia quickly became one of the hardest reservations not just in Downtown, but in all of Los Angeles.

While the two restaurants share a cuisine and a home in the same district, Ferdinandi said he and Auriana didn’t arrive just because of the community’s quick growth. Instead, there were more practical considerations.

“There are probably more attractive parts of this city to open a restaurant. But unfortunately, rents are becoming prohibitive,” Ferdinandi said. “A concept like The Factory Kitchen, where I want people to be comfortable with the food and the cost, is not something you can do in Beverly Hills or somewhere with $25,000-a-month rent.”

Ferdinandi settled on the location in February, and he was happy that Auriana saw the appeal when he visited the space in the summer.

They weren’t the first to see it as a potential restaurant location. Walter Manzke had been working on it as a space for his restaurant, Republique. Manzke instead ended up going to the old Campanile location in Mid-City (it debuts next week), opening the door for The Factory Kitchen to take its place.

Just as they came from different cities, Ferdinandi and Auriana had different paths to the restaurant industry in the United States.

Auriana left Italy in 1985 for a cooking career in the U.S., having graduated from the prestigious San Pellegrino hotel school and worked in top kitchens across the country. Ferdinandi, who was born into a family of bakers and cooks, left Italy the following year. He moved to London to study English, with hopes of eventually pursuing architecture.

Instead, Ferdinandi fell into the food business thanks to summer work in restaurant kitchens and as a waiter. He moved to New York and eventually worked as a general manager for legendary restaurateur Pino Luongo. In 2003 he joined Wolfgang Puck’s team as general manager of Spago Las Vegas. It was, as Ferdinandi puts it, “the time of my life.”

“Wolfgang and his partners really taught me what it’s like to set up a great operation, run it in an effective and profitable way and make a mark on the industry,” he said.

Ferdinandi came to L.A. to open Puck’s CUT and Sidebar concept at the Beverly Wilshire, then moved on to start his own cafe-retail establishment, Froma on Melrose. Most recently, he partnered with acclaimed Italian chef Celestino Drago to open Downtown’s Drago Centro in 2008.

A few years ago, Ferdinandi began thinking of opening his own restaurant. He saw an opportunity to work with Auriana, who had garnered acclaim for his 18-year stint running the kitchen at Valentino and was working as executive chef at San Francisco’s Farina.

As the old friends talked and planned, the vision for The Factory Kitchen became clear.

“It’s like watching a movie where you know what’s coming,” Auriana said of his meetings with Ferdinandi. “You look at each other and you just know how it’s going to happen.”

One of the most important lessons Ferdinandi took away from his mentor Puck was that a restaurant has to be accessible. Factory Kitchen’s menu reflects that. Currently, all pastas and starters come in under $20, while meat or seafood entrees range in the mid- to high-$20s.

The dishes mirror Auriana’s taste for simple, traditional food that honors locality. The mandilli di seta, or “handkerchief” pasta with a pesto sauce in the original style of Liguria, seems plain on the plate, yet a bite floods the mouth with the electric flavor of fresh basil and almonds, grounded by the silky wheat sweetness of the pasta. The pesto boasts such a rich texture that one would be forgiven for thinking Auriana slipped a pat of butter into it.

It’s one of many examples of Auriana’s elegant approach to cooking. He also utilizes some clever techniques, as revealed in the 24-month aged prosciutto served with milky stracciatella cheese. The menu description includes “lightly fried sage dough,” which brings to mind little puffs of bread to enjoy with the meat and cheese. Instead, the prosciutto and cheese arrive perched on top of a plate-sized hollow pillow of crispy dough. It deflates gently as you tear into it, perfuming the air with the autumnal scent of sage.

Italian food has always been a bit romantic and comforting. The Factory Kitchen pays tribute to that, but it’s also far more personal. The restaurant is a passion project for Ferdinandi and Auriana, one in which the food quite literally connects them to their heritage and friendship.

“The menu is basically a journey through the memories of Matteo and I before we came to the U.S. Life sometimes takes you full circle,” Auriana said. “It’s a rebirth for us because we’re finally together, working side by side to re-create something we remember as true Italian food.”