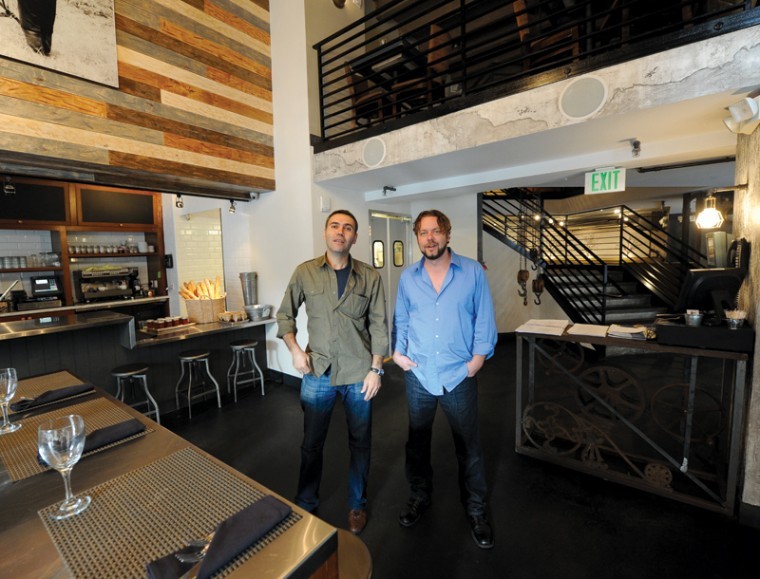 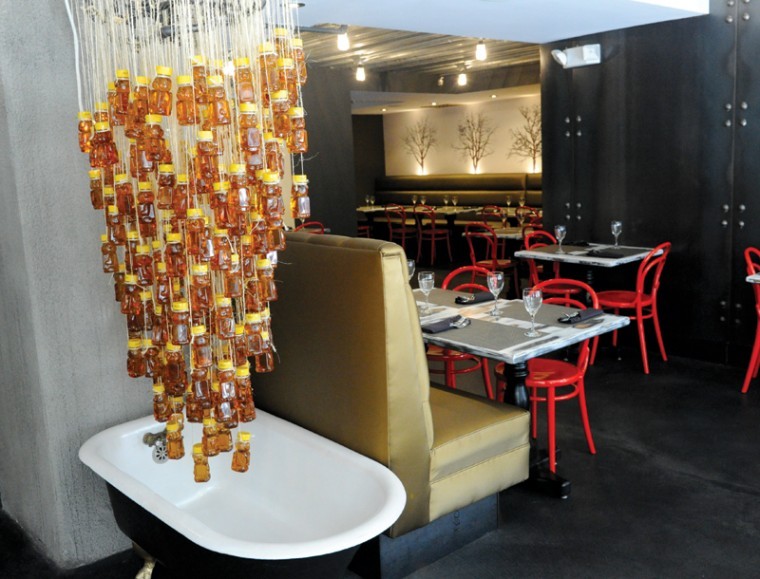 The two-floor restaurant contains some unusual decor, including a cascade of bear-shaped honey jars. 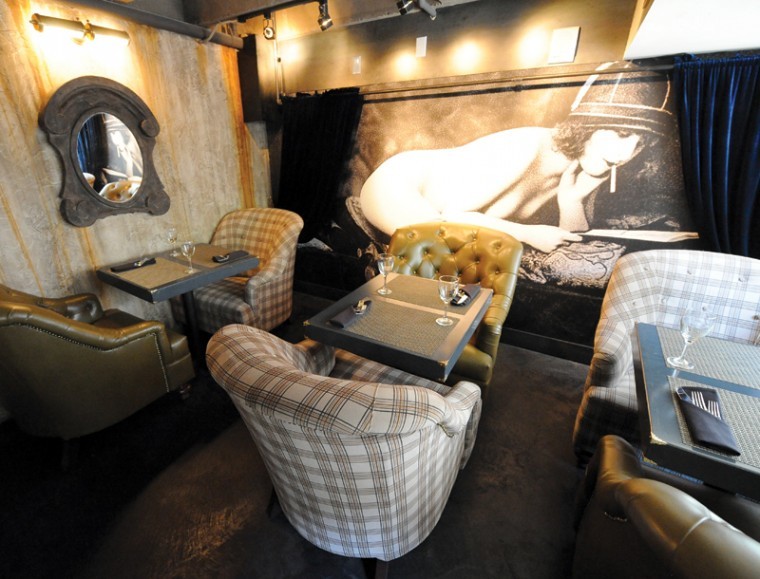 The two-floor restaurant contains some unusual decor, including a wall-sized photo of a nude woman.

The two-floor restaurant contains some unusual decor, including a cascade of bear-shaped honey jars.

The two-floor restaurant contains some unusual decor, including a wall-sized photo of a nude woman.

DOWNTOWN LOS ANGELES - It’s almost never good news when a restaurant goes out of business. But it’s likely that very few people miss the Carl’s Jr. that for at least 20 years occupied the 6,000-square-foot space on the ground floor of the Milano Lofts.

The fast food spot at the busy corner of Sixth Street and Grand Avenue closed in 2010. In May, it was replaced by Industriel, a French-inspired two-story restaurant created by Armen Hakobyan and his chef and business partner, Joseph Antonishek.

“We wanted to open something in a heavy traffic urban area with a big population, and Downtown is now perfect for that,” said Hakobyan, who also owns the Green Street Tavern in Pasadena.

A year-long renovation eradicated the old restaurant’s familiar yellow happy face star and instead brought in decorations such as the two wall-size black and white images of worn, Depression-era farmers. They flank the entrance to the 95-seat restaurant.

Inside the decor mixes a farm feel with an industrial vibe. It’s augmented by a French-based rotating menu described by the restaurant as “urban farm cuisine.” That means everything from escargot panini to duck cassoulet to house made goat cheese, chutneys, pickles and even bourbon.

Antonishek is pleased, if not poetic, about the result.

“We replaced a really [expletive] fast food chain with a fine restaurant, and that just helps build the city,” he said. “The more places like this that open up here, the more the area will benefit.”

Hakobyan, 43, has been in the food business since he was 12, when he began working in his family’s restaurant in Armenia. About 10 years later he was running his own place. He moved to the United States and opened the Green Street Tavern in Old Town Pasadena in 2007.

Antonishek’s culinary roots go back just as far. The 40-year-old Michigan native said he was born into a family of cooks. His great grandfather was president of the Michigan Restaurant Association and operated food trucks that catered to construction workers starting in the 1930s.

Antonishek got his first restaurant job at 15. In 1992, he graduated from the Culinary Institute of America at Hyde Park in New York and has since worked for chefs including Charlie Palmer. He clocked time as the chef at the Mondrian Hotel on the Sunset Strip and helped open O Bar in West Hollywood and Minx in Glendale. He joined Hakobyan to open Green Street Tavern.

The duo first saw the ground floor of the Milano Lofts at 609 S. Grand Ave. about two years ago after Eric Shomof, whose family owned the building until two months ago (it was sold to Equity Residential), came to the Green Street Tavern.

With the Downtown dining scene in full swing, Shomof said business at the Carl’s Jr. had tapered off. He wanted to replace the fast food chain with a higher-end, privately owned restaurant that would fit in with the changing neighborhood.

“We really wanted to get a cool restaurant,” Shomof said. “Something that would bring more character to the area.”

Construction took about a year and cost a little more than $1 million. It included the complete gutting of the space. Hakobyan didn’t worry about the fast food past.

“I’ve been in the restaurant industry for 20 years, so for me it didn’t matter what was there before,” he said. “You give me a room and I’ll make a restaurant.”

Industriel’s entryway features a pair of old-fashioned chairs flanking a gray metal trunk near a display of mason jars with pickles, vegetables and jams. The dining room’s dominant feature is an arrangement of bear shaped honey jars hung like a cascading beehive over a white bathtub.

Upstairs is a bar and more dining space dominated by a gold vinyl couch and a wall-sized black and white image of a naked woman. Although the nude may not imply it, Hakobyan says he was inspired by the similarities between farms and restaurants.

“The farm, like a restaurant, is a place where you work hard. There are long hours, but it’s beautiful because you are making something beautiful,” he said.

The farm connection continues with the menu, as Antonishek frequents farmers markets in Downtown and Pasadena. He said a goal is to prepare as much as possible in-house. Thus, the Industriel kitchen workers bake their own bread and make their own chutney, ricotta, pickles and jams.

The trend continues at the bar, where Antonishek said they barrel-age bourbon. One batch is meant for holiday cocktails and is flavored with dried figs and cinnamon.

Food standouts include the goachetta, a de-boned goat that is rolled, marinated and braised. It takes five hours to prepare and comes with gnocchi, mint, olives and smoked red pepper sugo.

“What you get on the plate is basically a head-to-tail piece of braised goat meat,” Antonishek said. “There’s no actual head on it, but everything else is there.”

In the same vein is the rabbit pelmeni, a dish Antonishek described as Russian tortellini that was inspired by an old family recipe. It’s made with shiitake mushrooms, mascarpone cheese, truffle oil and, of course, rabbit meat.

Hakobyan said Industriel is serving about 250 people a day, and expects that figure eventually to double. So far, no one has come in asking about the star with the smiley face.